Inverness, Florida - Elvis and Cyclists And Cooters, Oh My! 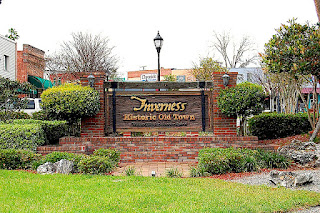 ...is what they say and from what I experienced, I'd have to say I agree. But first, let's look at the big picture. 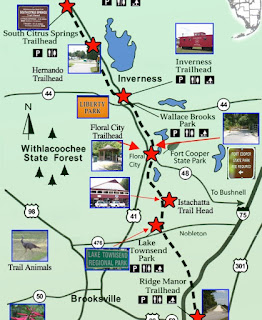 Sitting right smack dab in the middle of the Withlacoochee Rails to Trails (over 65 miles of transformed railroad tracks into biking and walking paths), Inverness is also surrounded by Whispering Pines Park, Liberty Park, not to mention Cooter Park. Which is a perfect segue into the Great American Cooter Festival (the third weekend in October) and made famous by Jon Stewart's the Daily Show's segment titled "Cooters!" Cooter in Inverness, by the way, refers to the turtle. You can watch the hilarious segment here. Jon Stewart Cooter Festival. 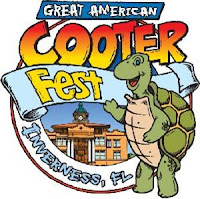 Hotel Note: If interested in staying in Inverness, check out the The Lake House and several more options.

Incorported in 1919, and positioned between Orlando, Tampa and Ocala, it serves as the center for local government. The flora, fauna, and fish will dazzle you in the parks, lakes, and rivers surrounding Inverness. We saw eagles, hawks, and blue herons. There are also white-tailed deer, black bears, and wild turkeys (which, no, we didn't encounter downtown.) So as you can imagine, this is a birder's and water lover's paradise. The area also offers campgrounds and horseback riding. And of course cycling - Inverness Bicycle. 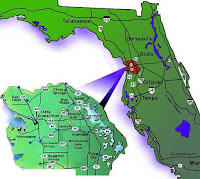 But we were visiting to discover the historic downtown area of Inverness. Here is the old Courthouse ...

...which now serves as the Citrus County Historical Society. It's listed on the National Register of Historic Places but is probably better known for the movie Follow That Dream starring Elvis Presley. In 1961, Elvis came to town to shoot the movie's climatic courthouse scene and "shook up" all of Inverness, and many locals were used as extras. 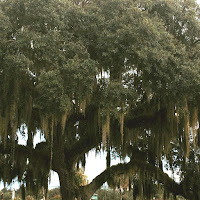 Majestic one hundred year old oak trees weeping with Spanish moss are peppered throughout the downtown area. We then visited the Valerie Theatre. 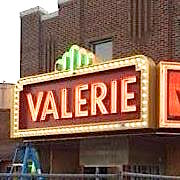 Being a playwright, I found the renovation of this sweet theatre inspiring. Originally built in 1925, the first film shown here was the silent, The Only Woman, starring Norma Talmadge. Vaudeville acts were performed during intermissions but sadly, over the years it fell into disarray but in 2015 the city commissioned the go ahead to revive this grand dame and it is now a nonprofit charity organization and the cultural home for the town of Inverness.

Next we did a food crawl around the Courthouse Square starting with the McLeod House Bistro.

Chef Michael Kulow, an award winning classically trained chef, offers an eclectic menu with starters such as escargot, baked stuffed artichokes and an eggplant and portabella mushroom flat bread.
But we enjoyed the crab cakes with roasted sweet corn bourbon relish and ancho chipolte cream. The chipolte had a nice kick of heat that was tempered by the sweet corn relish. Located in a hundred year old home, Chef Kulow invited us back to peek into his kitchen which was almost the size of maybe a food truck, which is amazing considering the amount of people they cater to each day. Next up was the a visit to the Deco Cafe.

Serving comfort food to the nth degree such as Prime Rib with roasted sweet potatoes and Grand Marnier mahi with broccoli slaw  - they even have fried green tomatoes! But knowing we were about to have dinner at another restaurant it only made sense that we tried their delicious but not too sweet pound cake. A big slice of heaven.


** It was very touching and inspiring to learn that there is a "tip jar" in the restaurant, and when a citizen of Inverness needs financial help, the town digs into its pockets and helps each other out. Talk about "doing things right!'

Next up - the Pine Street Pub.

Owners Lou Ann and Kemper have created a home-away-from-home pub - a "Cheers!" for Inverness. Packed with locals and visitors, events are put on every night!

Look at this amazing list of beers on draft or in house. Pine Street Beer Menu. But the food menu is just as comforting. We tried their Ripper Dog - deep fried till it splits open and then topped with an assortment of condiments. 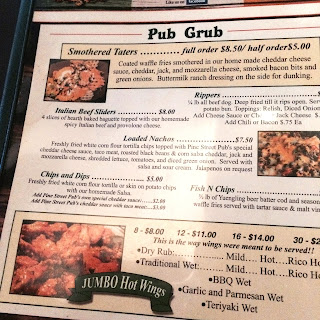 And to bring a close to this whirlwind exploration of Inverness' downtown historic district, my fellow travelers and I enjoyed an amazing meal at Chefs Of Napoli. A very festive restaurant to begin with,  I'm sure we were responsible for raising the decibel of noise up a notch or two. Happy noise!


We had such a warm and inviting reception at this restaurant. First up was a basket of homemade garlic knots and then an order of their Pulcinella Platter - Italian imported cold cuts and cheese topped with artichokes, roasted peppers and olives.

We also ordered the Eggplant in Carrozza as an appetizer - eggplant stuffed with prosciutto de Parma and mozzarella with romano cheese (surprisingly light) and paired it with a delicious bottle of red - a Banfi Centine Toscana.

My entrée was a fall off the bone, tender and moist pork shank with sautéed mushrooms served on a bed of pear filled tortellini...exquisite.

And to top off the meal, a delicate tiramisu - light and not too sweet with a hint of coffee and almond.

I'm still full a week later! Thank you Inverness for showing us a fantastic time.