My last trip to Florence was in 1988 - 28 years ago! My first thought upon flying over the Swiss Alps via Brussels towards this remarkable city was, will anything have changed? 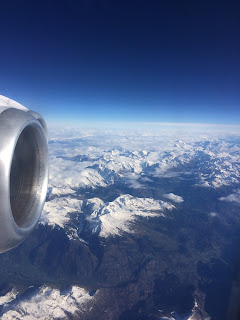 Structurally, no. The ancient city is historically protected (although I confess, I did grab a quick cup of American coffee one afternoon in a McDonalds tastefully hidden within an architectural gem of of a building.) 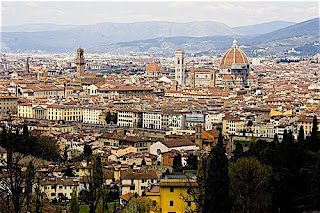 So strolling through the city, dropping into shops, restaurants, museums . . . something had changed. In my mind, Florence, specifically the Florentines, were friendlier, more helpful than I recalled from my previous visit. Not that that they were rude in the past but I had a clear remembrance that I was more of an annoyance, especially speaking English, than a welcomed guest. This trip felt as though they had opened up their arms and embraced me. Or maybe it was because I was older. Maybe I was more patient. Maybe I was friendlier. 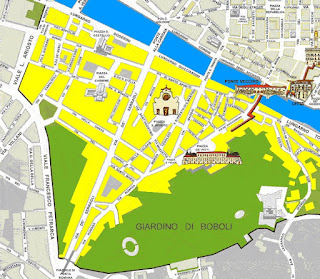 Upon landing, my travel partner Bud Santora and I jumped into a cab. Our very personable taxi driver drove us to the Oltrano neighborhood where our Airbnb was located. The Oltrano is across the Arno River, a short walk across any of the bridges and you're in the heart of Florence proper. Staying in the San Frediano area of the Oltrana truly made us feel like we were a part of the residential neighborhood. Few tourists were around and the shops . . . 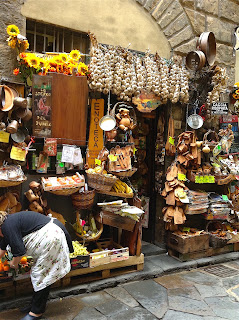 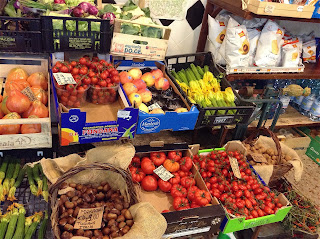 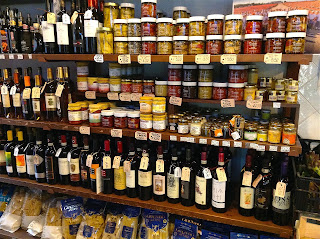 . . . which were plentiful, had anything and everything you could want, usually within one shop.

Our Airbnb was Claudia's apartment. Just as portrayed in the pics on the website, we were delighted with the stay.

(NOTE: If Airbnbs or VRBOs are note your style and you prefer a hotel, the Westin Excelsior is exceptional!) 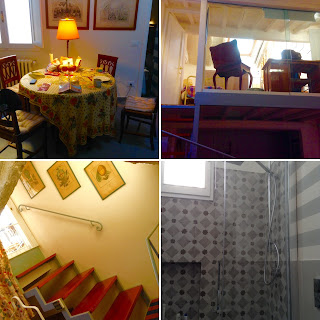 Top left - the kitchen table's full of taste treats and guidebooks. (Yes, I still love books even though I can get all the info on the Internet.) The upper right you're looking up to the second floor bedroom which has its own bathroom. There's another one downstairs. Bottom left are the stairs leading up to the rooftop deck and bottom right is the upstairs shower. Everything was tastefully renovated. (I wish I had her bathrooms in my NYC apartment!) 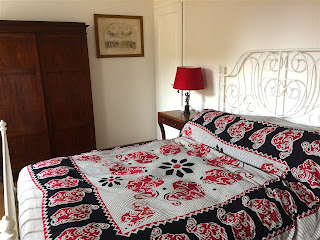 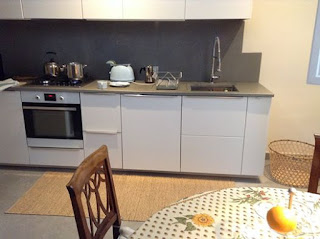 And here's her streamlined, modern and extremely efficient kitchen, plus there's a washer and dryer. But the pièce de résistance (excuse my French) was the terrace. 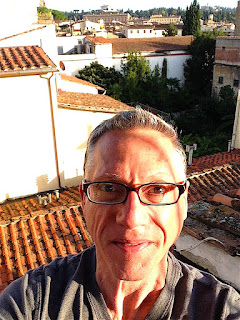 Almost every late afternoon, we'd have wine and bread with prosciutto and cheese admiring the gorgeous views. While the sun would set, we would joyfully wrestle over where we would have dinner . . . 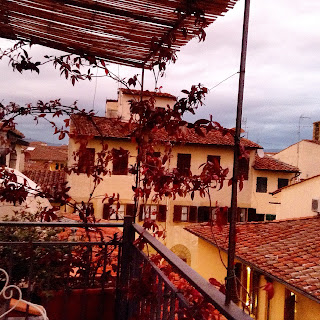 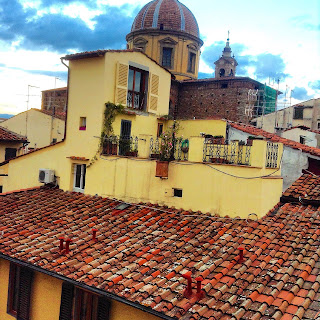 . . . often while listening to the church bells chiming.


But first things first, we had to explore.

DIZZY NOTE: Careful, the sidewalks are very narrow and scooters and cars are constantly zooming by. The cobble-stoned streets are also tricky, keep your eyes open.

So off we trotted down the street to the famous . . . 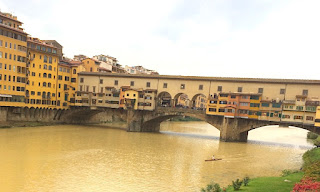 medieval stone bridge, the Ponte Vecchio crossing the Arno. Originally the tenants were butchers but now the bridge is full of jewelry, art, and souvenir shops. It's always very lively, day and night, with tourists and street performers.


We sauntered towards the Piazza della Signoria and on our way we passed . . . 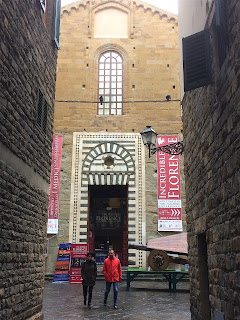 . . . the Incredible Florence performance center. Giant screens surround you as this multi-media time machine offers a journey through 2000 years of Florence's history. A bit overwhelming, but quite effective. Then off to Piazza della Signoria.

A gorgeous and busy square surrounded by hotels and restaurants and the Palazzo Vecchio, the city's town hall, is located here...


. . . as well as a copy of Michelangelo's David (the original is now housed in the Accademia Museum) . . .

. . . and the Loggia dei Lanzi, which is open-air sculpture gallery of antique and Renaissance art.

Realizing we needed to eat dinner sooner than later or we'd fall asleep, we headed back over the Ponte Vecchio and we discovered the Piazza Santo Spirito named after the Basilica di Santo Spirito. (It's the square just before the one we were staying by.)

And the piazza Santo Spirito is a beautiful square with a fountain in the middle, surrounded by scores of restaurants and bars. By chance we picked an exceptional place called Trattoria Borgo Antico. 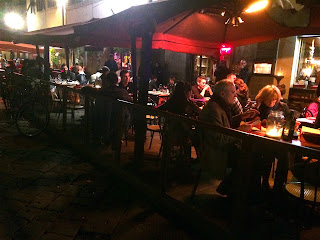 Right next to the restaurant was a very popular bar populated by locals, Volume. The weather was fantastic for this trip in mid-October so we were lucky enough to be seated outside.

At Borgo Antico we ordered an appetizer of liver pate on crostini with capers, which was served with a semi-hard cheese, dipping bowl of honey, a pickled hot pepper, pickled onions and a smear of mustard. Oh and two candied somethings . . . maybe a slice of grapefruit and a green cherry? I'm not quite sure why we didn't ask the waiter what they were, but they were gobbled up, every morsel. 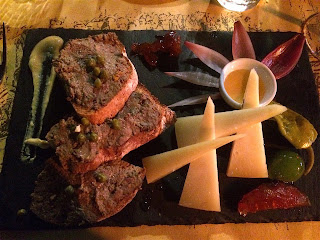 We also ordered a selection of country homemade salami, crostini and more pickled veggies. Already this is enough food for 20 people! 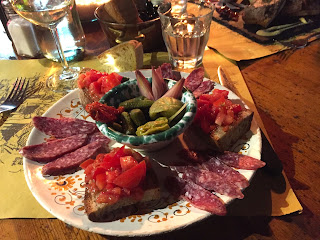 For entrees we had a beef stew made with red wine . . . 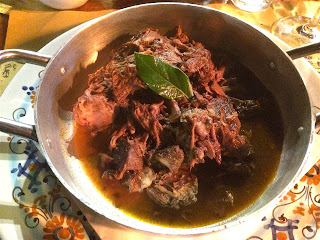 . . . and gnocchi with a rich gorgonzola sauce. 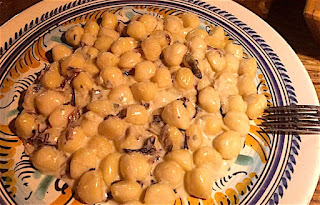 Both dishes were fantastic but the beef in red wine was to die for. I'd kill for that recipe.

Walking back to Claudia's apartment admiring doorknockers along the way we agreed we had to return to Borgo Antico once more before we left Florence. 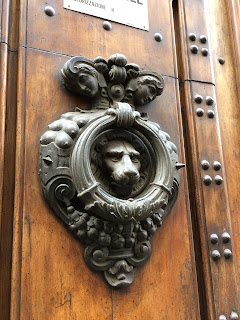