If It’s Tuesday, This Must Be Belgium Part 1

A Norwegian Transatlantic Cruise to Europe from New York City

This transatlantic cruise sailed late April 2019. This is part one which involves the ship and the crossing. In light of the ongoing Corona Virus Pandemic, obviously all ships are forbidden to sail. When it's safe to cruise, I wouldn't hesitate to do a trip like this again. In fact, I was booked on a transatlantic trip from New York City to Barcelona with stops in Portugal and Spain which was canceled due to the virus. So travel with me across the Atlantic and on to Europe, from the safety of our homes. And here's hoping we can travel again, soon.

I love cruising, so when I saw that Norwegian was offering a 13-day sailing, leaving from my home port of New York City and ending up in Amsterdam with prices starting under $500 per person, I leapt at the chance and booked the trip. Ports of call included: Ireland, France, England, Belgium, and finally disembarking in Amsterdam. As many meals per day as you desired, entertainment every night, free gym and a plethora of activities to take part in, it was cheaper per day to sail to Europe than stay home!

Having traveled with Norwegian previously, I was part of their “Latitudes Rewards” program and with that privilege come perks: room upgrades, free dining in specialty restaurants, deals on WiFi, discounts in the ship’s spa and in my case, even open bar for the entire trip. Trust me, that saves you a wine bucket full of money.

So, I asked my travel mate, Bud, if he was game and we jumped into a cab and headed to the cruise port in New York City located at 55th Street and the Hudson River. Now, how convenient is that?

The Norwegian Pearl was built in 2005 but completely refurbished in 2017 which made the ship feel brand new. All 1,179 staterooms had an upgrade which included new carpeting, new televisions, new furniture, new beds, and USB outlets where guests can charge their electronic devices.

Throughout the ship, over 2,220 pieces of artwork were installed, including a stunning Chihuly sculpture sitting proudly in the main atrium.

When it comes to food, there are so many venues to choose from; 8 complementary restaurants plus room service, 6 specialty restaurants with additional fees plus 15 bars and lounges.

What makes Norwegian stand out from the other cruise lines?

Their biggest claim to fame is their “Free-Style” cruising. On many other lines you must sign up for a certain time to dine and you are given a specific table to sit at in the evening and on designated nights you must dress up in formal attire. On Norwegian, dress is casual, you can dine any time you like and sit anywhere you prefer. The last thing I wanted to lug around on this long trip was a business suit and a tuxedo. But if one desires, you’re more than welcome to dress up.

Absolutely! Every night, a Freestyle Daily pamphlet appears in your cabin with a list of everything available to do on the ship for the next day. For years, Friends of Dorothy, was listed and indicated where and when people could meet. But this trip something simple but very powerful happened. Friends of Dorothy was gone and LGBTQ+ Informal Get Together showed up instead. In my mind, this is a true indicator that we, as gay travelers, have been welcomed openly and with respect. This was my 6th cruise with Norwegian and not once have I felt slighted or experienced any sort of homophobia from either the staff or other cruisers. In fact, on this trip, a 72-year-old gay couple appeared onboard holding hands and dressed in matching baby doll sailor suits with full make-up and wigs. Now, even my jaw dropped but with a smile. And they maintained baby doll characters for the entire trip, changing costumes every day. Many befriended the couple and even the Captain requested a photo with them. As one straight traveler shared with me, “I observed people treating them with respect rather than ridicule. Totally refreshing.”

The Activities and Entertainment

They have bingo, slot machine and black jack tournaments. There are art classes, you can learn bridge, or take dance lessons. Audience participation games are numerous including a Deal Or No Deal show based on the television version where you could win $5,000.00 or a cruise for two. There were cooking classes and lectures about upcoming ports of call. And for those who love their libations, there were wine tastings, martini tastings, beer tastings, scotch tastings, and tequila tastings.

The first couple of days, most people explore the ship and all it has to offer. I hit the gym at least once a day. They had scores of physical programs you could participate in from Pilates and body sculpting to classes in nutritional education and weight loss. One of my favorite onboard activities was the bowling alley. Not having played since a teenager, it was a bit daunting to lace up the shoes and pick up the ball while others were watching and the ship swayed side to side but I did pretty well. It was like riding a bike, it all came back to me.

Every night a different movie is viewed on the main atrium’s ginormous screen and simultaneously on your cabin’s television. We also explored the many different bars and lounges to pick the one or two that we would probably frequent the most. For me, I like the less crowded, more secluded spots. Plus, you often get to know your bartender and they you, for the trip.

They also have multiple cabaret performers as well as bands that rotate from one lounge to another throughout the day and into the evening. And there’s the Mandara Spa where you can receive just about any type of pampering you can imagine.

There’s a very quiet library to escape the crowds. Around the 5th day at sea I had a hankering to write and with an article due while I was traveling, the library was the perfect spot to create while occasionally looking out to sea and spotting a humpback whale or two.

The Casino opens once you are one mile out at sea. Previously I’ve won up to $700 with slots but not this trip. And every evening there was a complementary show in the theatre. The specialty acts were superb on this crossing. There was a magician, a husband and wife adagio act who defied gravity but my favorite was Izabella Zebrowska, a Polish violinist. Her first show was totally classical and breathtaking. But Bud turned to me and said, “Wouldn’t it be great if she also included some pop and showtunes?” Well, her second show later in the week was geared around the West End’s hit musicals and famous movie scores.

I’ve never been disappointed with the food on Norwegian cruises. I do have to admit, I’m not a huge fan of buffets...buffets anywhere. I end up piling on too much of too many different types of food and the stomach isn’t crazy about that. Besides, I love to be served when I dine out. And because there are so many sit-down restaurants onboard, you have plenty of options to choose from. But the food the buffets displayed were always well presented and looked delicious.

On warm days it was wonderful to have breakfast in The Great Outdoors which is a bar and restaurant area at the back of the ship.

The two main dining rooms are Indigo and the Summer Palace. Indigo is the smaller of the two and offers a more intimate dining experience. The Summer Palace is very large and its décor is inspired by the great summer palaces of Russia. I found it fascinating that the Summer Palace has scores of life-size paintings of the Royal family, clearly done just before they were executed. An odd choice in my mind for a restaurant, but most were beautifully done. Both restaurants are open for breakfast, lunch and dinner and they share the same menu for each particular day. A typical evening meal may consist of a starter of bouillabaisse soup, followed by garlic roasted leg of lamb and for dessert, a warm peach tartlet. The menus change every day and if you’re really hungry, you can order as much of anything as you like.

Of the 6 specialty restaurants, we ate at Cagney’s Steakhouse and the French café, Le Bistro. For an entré at Cagney’s I ordered the grilled ribeye with their green peppercorn sauce. The steak was superior, as good as some that I’ve had at renowned steak houses in NYC.

And in Le Bistro, I ordered the pan-seared jumbo bay scallops with a sherry vinegar glaze and cauliflower mousseline, which was perfectly cooked, and Bud ordered a glorious Napoleon of Portobello mushrooms and vegetable puff pastry with goat cheese, red pepper, sweet potato, and a beurre blanc. It was almost too pretty to eat.

Often, we would see the earlier of two shows in the theatre which was at 7:00 pm. Traditionally they last one hour, so from there we’d go to our favorite bar, have some martinis and then head on down to the Summer Palace for a late-ish dinner. Very civilized.

I’ll admit, a week to cross the Atlantic had me a bit concerned. Would I get bored or restless? Ships can make the journey faster but that eats up much more fuel hence it’s worse on the environment and the cruise fares would increase. Plus traveling across the pond, your body very gradually adjusts to time changes therefore, no jet lag. And honestly, the 7 days at sea went by like a breeze - no pun intended. We were traveling late April and into May so the weather was extremely mild. 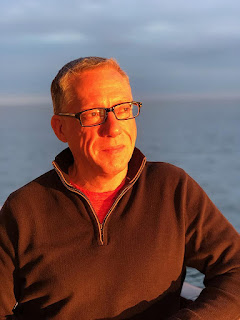 Often people were in the outdoor pools and hot tubs or playing human chess, basketball, shuffleboard, or scampering up the rock-climbing wall. There was even a driving range where you can work on your swing or you could just grab a deck chair, a smart cocktail and people watch.

After the 7 days to cross the Atlantic we would be making ports of call in Ireland, France, England, Belgium and finally, the Netherlands. Each excursion gave us about one day to explore. The ship offered a multitude of excursions but do your homework, sometimes a third-party company offers a better price and a more interesting itinerary. The major bonus with booking a ship’s excursion is you’ll never miss the boat. If you’re not back in time from a private excursion the boat will leave without you.

Part two of this journey will cover all of the shore excursions in Ireland, France, England, Belgium and then 3 nights in Amsterdam.