In 1513 Spanish explorer Juan Ponce de Leon, while searching for the the Fountain of Youth,  stumbled upon what is now known as, St. Augustine, FL.

But it was millionaire and co-founder of Standard Oil and railroad magnate, Henry Flagler, who put the city on the modern day map when he built the Ponce de Leon Hotel in 1888. A first of its kind, the hotel had electricity, (Thomas Edison was a good friend of Flagler's), running hot and cold water, and steam heat.


Opening day of the hotel some of the famous people attending were Ulysses S. Grant, William R. Rockefeller, and Frederick Vanderbilt. What a guest list! And listen to this...to be part of this very exclusive bunch, you couldn't stay at Flagler's hotel for a night or two or even a week. You had to stay for the entire season. And pay for it!

Much of the original decor of the hotel still exists. Built in the Spanish Colonial Revival style with subtle Moorish influences, you enter the hotel through a welcoming rotunda that is supported by giant oak columns. 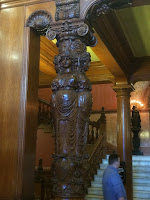 Stunning mosaic tiles cover the floor. But look closely and you'll see a tiny tile with the image of Henry Flagler looking back up at you, ghost # 1! He's always keeping a watchful eye over his opulent hotel.

Inside the Ponce de Leon, just past the rotunda foyer is the original oval dinning rooming capable of seating 700 and all of the windows are fitted with Tiffany stained glass. In 1968 the hotel transitioned into what it is today, Flagler College. Knowing that this is where the students now dine, it had a very Harry Potter feel to it.

Another door off of the main rotunda takes you into what was originally the ladies lounge.

Flagler also went on to build the Alcazar Hotel, across the street from the Ponce de Leon and which now contains the Lightner Museum and also the Casa Monica just down the street.

After leaving the hotel, my travel buddies and I then savored a food and wine tour organized by St. Augustine City Walks. Check out their variety of city tours. Our guide was Ed and he had some terrific stories to tell that complimented the appetizer and wine crawl. There were so many great places we visited, but there were two that stood out for me. One was the Alcazar Cafe.
It's actually situated at the bottom of the hotel's former swimming pool. Imagine how grand it must have been to swim in this indoor pool?


Escargot...my first taste. Honest, I had never eaten one before. On purpose.


I just knew I was going to hate eating a slug, assuming it would be similar to gnawing on an eraser. But not so. I was pleasantly surprised at how soft and melt-in-your-mouth tender and buttery and garlicky they were. Yum. And my other favorite visit was to the Old City House Inn.


A gorgeous bite of shrimp, potato, and thinly sliced radish with a rosemary balsamic reduction. The charred shrimp and bitterness from the radish paired beautifully with the herbs and the sweet and tangy balsamic glaze. Then the potato clears your palette...and you want another one. This dish makes me want to go back to the restaurant for a full dinner.


While in St. Augustine I stayed at the St. Francis Inn. Built in 1791 it's the oldest St. Augustine inn. Within walking distance of all the activities downtown, the St. Francis was quaint and quiet with very gracious hosts. There's a lovely garden patio, house cat, swimming pool and (this is number 2!) they have a ghost...Lily. Friends of mine who stayed in the main house across the hall from Lily's room swear they heard chains rubbing against their door in the night, fearing it was the ghost. I stayed across the street in the Wilson House in the Wilson Suite.

Sometimes I'm hesitant to stay at B&Bs and Inns because the walls tend to be so paper thin that you can hear your fellow travelers thinking in the next room. But my suite was very quiet and as you can see, beautiful. The only thing better than their breakfasts were their afternoon complimentary happy "wine" hours with taste treats!

The St. Augustine Lighthouse is the oldest in the country and also provided us with ghosts 3, 4, 5, and 6.  After an archaeological and preservation lecture regarding maritime discoveries in the local waters, we were each giving an EMF paranormal reading device. Although one of my travel mates literally felt a ghost touch her leg I felt special that my EMF was having a field day as we explored the main house - flashing on and off.

DIZZY NOTE! As night fell we were offered the chance to climb up to the top of the lighthouse with our EMF readers to check out for ghosts...a little girl in particular. And the question was, do you want to climb up the 219 spiral steps in the dark? Or with lights on? Now this is my 10th year with my vestibular challenges and as some of you know who suffer these symptoms, in complete darkness, my brain forces my body to fall to the ground because it can't tell where I am in space. I think it's a primal self-protective mechanism. My ego got in the way and I didn't want to tell the group I couldn't do a spiral staircase in the dark, but the guide let me go up with her first, very quickly, with her flashlight. I'm proud to say I did it. And the views up top were stunning. However coming back down by myself in total darkness was a bit scary. Like Hitchcock's film, a bit of vertigo started to set in. Not sure I would recommend it to others with balance disorders to do this in the dark. But I'm alive!

We were only in St. Augustine two days, but what a whirlwind. We also had a personal tour of the Colonial Quarter taking us back in time allowing us to experience what life was like in the 16th, 17th and 18th centuries in this city... 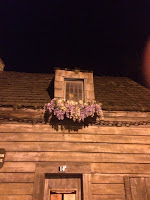 But there was yet another source of ghosts for us...I think #s 8 and 9...while on the Ghost Tours of St. Augustine. I've never experienced so many ghosts in one town in my life! There's so much to do in St. Augustine, I truly do want to go back. And maybe I'll discover a real ghost! 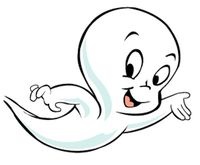