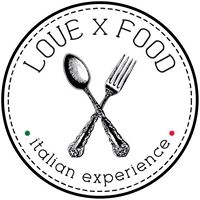 On my most recent trip to Florence, Italy, to do research for a feature article I'm writing for Passport Magazine, I booked a cooking class just 15 minutes outside of the city in the Chianti Hills.


The class was going to focus on making pasta. I had wrestled with preparing homemade pasta years ago and in a flour-induced panic, I gave up midstream and dashed out to the store to purchase packaged pasta. I never tried again, until last week. But LovexFood is more than a cooking class, it's an opportunity to witness two Italian men share their passion for cooking and their love of life.
Both Luca & Lorenzo learned how to cook from their grandmothers. The recipes and tips are simple but sublime. While explaining very clearly what they were creating, we all shared stories of our lives, careers, where we were from and cooking habits. Their passion and love for what they do clearly is felt in the dishes that have been handed down from family members. With classes of up to 8 people, I was in a group of just four, which really gave us a chance to share and experience a lot. Along with my friend Bud, we met Michelle, also from New York City and Anthony, from Venezuela. 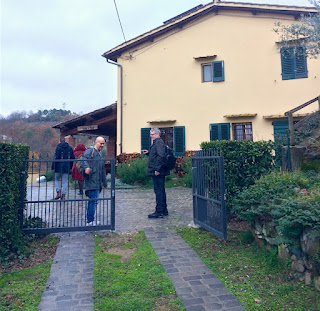 Luca met us at the Santa Maria Novella train station in Florence and we were whisked off to Lastra a Signa. Even though we had a drizzly day of rain the week before Christmas... 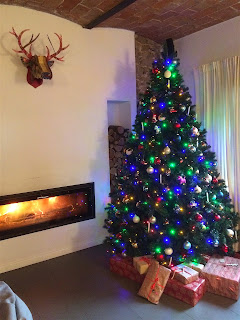 ...their home was warm and inviting. With their tree already up and decorated and a roaring fire burning in the fireplace, morning coffee and a spread of taste treats were offered. 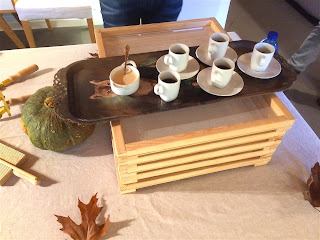 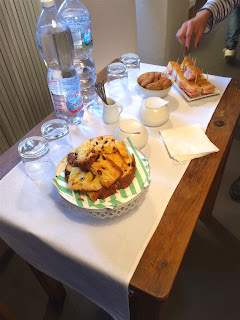 This class is a total hands-on experience that even novices can handle.

Arthur:  Luca & Lorenzo, how long have the two of you been sharing your passion for cooking and life, through your company LovexFood?

Luca & Lorenzo:  We grew up in families in which cooking is the best way to show the love you have for someone and we always enjoyed sharing our passion for cooking with family and friends.
In 2016 we decided to turn it into a job in the way we can do it with people coming from all around.
We love to travel, we are tourist as well so when we are on holidays we love to spend some time with locals doing authentic activities. Our experience is exactly what we expect when we are on vacation.

Arthur:  How did the concept of LovexFood evolve? Did one or both of you come up with the idea?

Lorenzo :  We both worked in fashion for several years. I was a designer for the visual merchandising department for a worldwide fashion brand and Luca a brand ambassador for a luxury brand.

Luca:  A colleague told me about a friend that was doing a cooking class with people that came here visiting Tuscany… I shared the idea with Lorenzo and we started thinking about it…usually we cook for friends, so, why don’t we do it with other people?
Arthur:  I know Lorenzo, you are from Milan and Luca, you spent your childhood in Livorno, which is on the Tuscan coast and you spent time on the Amalfi coast, where your mother is from. Your recipes are those of your Grandmother’s and other relatives; so is your cooking a type of fusion of the two areas or do you take turns sharing your recipes?

Lorenzo:  My relatives are originally from Emilia Romagna, the land of the fresh pasta and from Tuscany. I grew up in Milan.
Luca:  Yes I was born in Livorno, in Tuscany. My father is from Sicily and my mother from the Amalfi coast, so I spent a lot of time there.

Luca & Lorenzo: Our food background, it comes from north and south, which are very different for several aspects like food, traditions, dialects…our way of cooking is just bringing back what we learned from our grandmothers and relatives.

For this aspect we are fully Italians and we strongly defend our food heritage, it means that we fight like an old couple deciding what to do during the cooking class and that means - compromise. 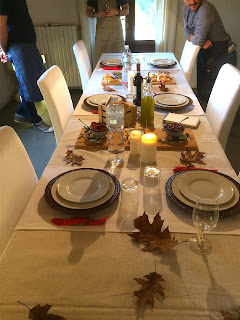 Arthur:  The two of you are a couple, how and when did you meet?
Luca & Lorenzo: We meet in a fashion party during the Florentine Fashion week in January 2008, we fell in love and we started sharing our lives together.
Arthur:  What do you see in the future for LovexFood? You’re both perfect for the screen, and your personalities are very complimentary...do you ever dream of having a television show?
Luca & Lorenzo:  In the beginning we never thought about it but a lot of people have suggested the possibility…YES why not?? It sounds like a new exciting experience!! 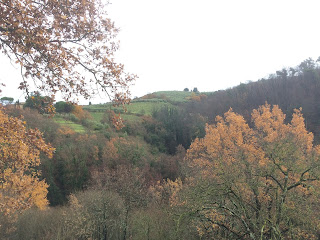 Arthur: While I was visiting, you brought up the idea of a cookbook?

Luca & Lorenzo:  We are editing our family recipes with the help of a new American friend that enjoyed our experience. We are working on that…so probably yes.
Arthur: And you have a second home on your property. You mentioned that you might turn it into a bed and breakfast. Is that a real possibility?
Luca & Lorenzo:  We recently bought a new property near by our place and we’re thinking that we can involve that for the next LovexFood project and one of the options is giving the possibility to rest in our property even some nights. The Tuscan countryside is a magical place and will be a memorable experience spending some time here and why not, cooking something together?! 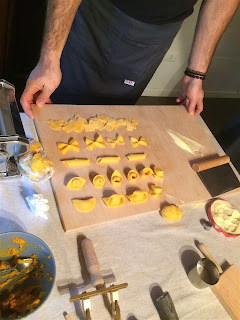 Pastas we made in our class were: ravioli with pumpkin filling, bow ties, tortellini, rigatoni and potato gnocchi. We also learned two different sauces. So easy and simple, even “non-cooks” would be able to master these mouthwatering recipes. 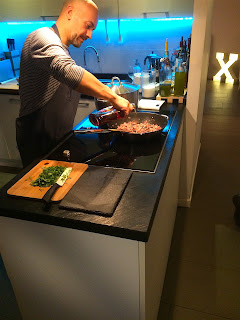 One was an olive oil, butter and fresh sage sauce and the other was a speck, brandy, chopped arugula, and cream sauce. 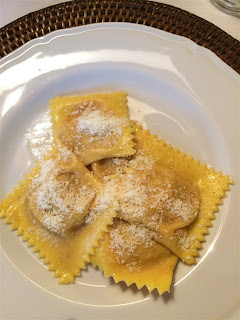 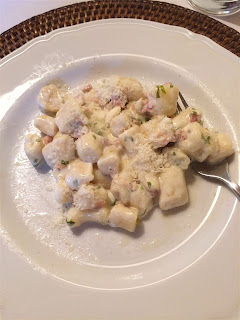 When all the food was ready, we sat down to devour our creations at a beautiful and tastefully set dining room table and local Chianti wines were served at the meal. 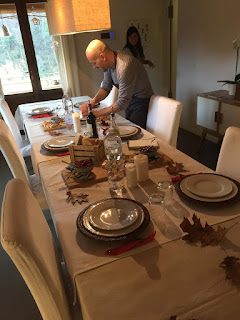 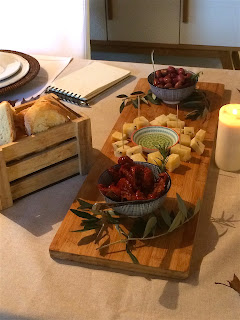 We tasted the olives from their very own olive trees and their olive oil, which had a light and deliciously peppery taste.

And keeping things fresh, the eggs we used for cooking came from their own chickens - Regina, Pisola, Tosca, and Mimma. And the herbs used in their dishes are all from their garden. Can it get any fresher than that? 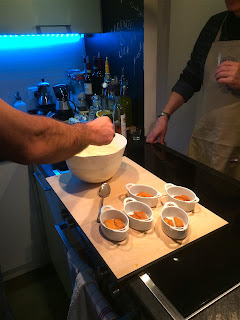 Plus dessert –  a light and not too sweet, tiramisu that we all helped to create! On the bottom of the dishes are cantucci (regional biscotti) dipped in Vin Santo and then topped with homemade marscapone cream and a sprinkling of cocoa powder.

The 6 and a half hours flew by. Honestly, I didn’t want to leave. And if the men do open up a bed & breakfast, I'll be one of the first to book a reservation.

After enjoying Luca & Lorenzo's cooking class at their farmhouse, my fears, frustrations, and failure happily disappeared. Their knowledge, simple explanations, and patience fueled me to run back to New York City and recreate their delicious and traditional family recipes.

"We would like that people understand that ours is an unconventional cooking class...we share with people our what our families shared with us...spending some hours cooking with people as we are friends...usually we shake hands when we first meet you at the station...then we say goodbye with an Italian strong hug!!" 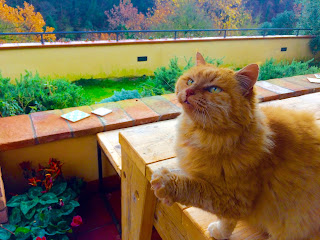