Janet and The Pumpkin Ash

I'm so proud of  my sister, Janet Wooten, for discovering a rare "pumpkin ash" tree living in Central Park. As Janet says, "It's important to emphasize the citizen science aspect and that you don't have to be an expert to make a contribution."

The article that follows was written by Michael McDowell of the West Side Rag Newspaper of New York City and was published on October 9th, 2018.

Broadway, the spine of the Upper West Side, is the neighborhood’s hydrological divide: water on the west side flows toward the Hudson, while on the east it flows toward Central Park. Before Central Park was Central Park, springs in the hills near 103rd Street fed Montayne’s Rivulet. Now known as the Loch, it’s here you’ll find the rare pumpkin ash, Fraxinus profunda—but only if you know what you’re looking for.

And local citizen scientist Janet Wooten knew what she was looking for when she recently discovered a pumpkin ash on the banks of the Loch.

First, it’s important to know why this matters. Research on the ash has taken on new importance in recent years, as the tree has been devastated by the emerald ash borer, an invasive species that arrived from Asia on shipping pallets. The borer has impacted ash in the city, in Staten Island, Brooklyn, and Queens, but has not yet been seen in Manhattan or the Bronx.

Fraxinus—ash—is indigenous to North America, and there are four native species of ash in New York City: green, white, black, and pumpkin. Ash mature, or begin to produce fruit, in 20-30 years, and it’s the fruit by which the species are distinguished from one another.

“There is a lot of variation that is cryptic in the ash genome, and they haven’t been well studied,” explained Daniel Atha, Director of Conservation Outreach at the New York Botanical Garden’s Center for Conservation Strategy, as we walked toward the Loch on a sultry Saturday morning.

Ash trees are very important for ecology and economy: there are numerous insects and birds that depend on the ash tree, fungi that live only on ash trees, and ash produce the best material for baseball bats, superior to maple, which has a tendency to shatter.

But in Cooperstown, New York, home of the National Baseball Hall of Fame, conservationists have largely ceded the field to the beetle, and the borer is well established in the Catskills. When afflicted, a tree has near 100 percent mortality.

“It’s not a pretty picture,” said Wooten. “We want to do whatever we can to find all of these trees, and then come up with some sort of strategy to help them.”

Since 2016, botanists and researchers at the New York Botanical Garden have been studying the genetics of ash trees, their distribution, and the differences between populations and between species. Some trees may be more resistant to the borer than others, and uncovering a genetic basis for such resistance could be key in developing a breeding strategy to stabilize ash populations.

But there aren’t enough experts, or enough resources to do this work. Enter dedicated citizen scientists like Wooten, who joined NYBG’s EcoFlora program in April. After years in the corporate world, Wooten wanted to be outside, and is the kind of committed, motivated, and expert volunteer who brings invaluable energy to a project.

“I wanted to make an impact, so I decided I wanted to be one of these volunteers who contributes a lot of data to a huge database, and someday, somebody will use whatever information I’ve provided for their studies, and maybe they’ll make some kinds of policy decisions based on that,” she said.

“But I didn’t think I’d find a tree that was undocumented—that to me is very rewarding.”

We arrived at the pumpkin ash that Wooten found, four slender trunks growing from a round base—pumpkin refers to the bulbous base of the tree—on the edge of the still, brackish water toward the end of the Loch.

“I noticed the leaves, and I thought, this looks like an ash tree, and I took photos of the seeds—so I knew that it was at least a white ash, but I wasn’t thinking it was a pumpkin ash, because I know how rare that is. I also thought that all of these trees were documented, because [the Loch] had just gone through a renovation, and I know that there’s been surveys, so I figured people know what’s here,” Wooten recalled.

The Central Park Conservancy renovated the Loch several years ago.

“It turned out, after I measured the seeds with a scale, with a ruler, and after I looked at it more closely, that it really was a pumpkin ash.”

Wooten confirmed the find with Atha, who pointed out a few other pumpkin ash near the Loch, hidden in plain sight. “Botanists always think they have to go somewhere far away to find something interesting,” he said, “people think there is nothing new to discover in New York City, but that is definitely not true.”

“I was in the right place at the right time, the tree was fruiting, and I had an idea about what I was trying to accomplish,” added Wooten.

Pumpkin ash, which is critically endangered, was first listed in New York by Nathaniel Britton, who founded the NYBG. After he died, the tree was dropped from the flora of New York, but it’s been here all along—it’s a native plant.

Other than the population Wooten discovered near the Loch, there are a few pumpkin ash near Turtle Pond, at the Delacorte Theater. The species grows exclusively in swamps, in very wet soil, where not many other trees are adapted to grow.

“We now know that there are two [pumpkin ash] populations in Central Park, and the trees are doing much better than we thought. The Conservancy now knows that these trees are here, and that all of their hard work has paid off in the preservation of one of New York State’s rarest trees,” Atha said.

So how can interested citizen scientists get involved? There’s an app for that.

NYBG has started EcoQuest Challenge, in partnership with an app called iNaturalist. The challenge focuses on a particular species and ecological relationship each month, and seeks to encourage “New Yorkers to become citizen scientists and observe, study, and help to conserve the city’s native plants and animals.”

iNaturalist is a biologist’s dream. The app uses image recognition to assist users in identifying the plant or animal they have spotted, and records date, time, and location, using GPS. It’s harnessing the power of the crowd—and the supercomputers most of us carry in our pockets—to generate data that anybody can download and use. The data is not shared with any other entity or marketer, and individual user profiles are private.

In September, EcoQuest sought to Find Fraxinus; in October, it aims to Watch for White Snakeroot.

A pioneer woman—a healer in Ohio named Anna Pierce Hobbs Bixby—befriended a Shawnee woman one day while minding her cattle. The Shawnee woman, whose name I wasn’t able to track down, told Anna Pierce that the source of the milk sickness was the white snakeroot. Pierce, a citizen scientist, did an experiment: she fed the snakeroot to cows whose milk in turn became poisonous, and another plant to cows whose milk remained drinkable. Pierce described the results of her experiments in her diaries, which were published some years later, and is now credited as having identified the relationship between white snakeroot and milk sickness.

“Since 1811, about 2000 species of plants have been reported in New York City,” Atha said. So, citizen scientists: what are you waiting for?

“What you can find in Central Park is amazing,” Wooten mused, with a last look out over the Loch toward the pumpkin ash. 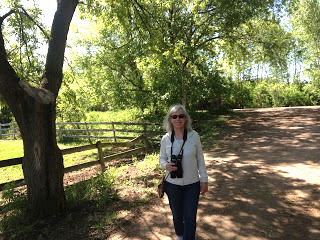