A Quickie In Boston!

I grew up in Andover, Massachusetts... 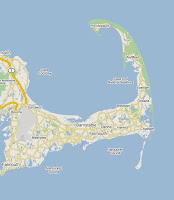 and have always felt that Boston was my hometown "city." And for many years I've been going to Provincetown, way out on the very tip of Cape Cod.

Now that I live in New York, to get to the cape, I'd usually fly to Boston and then take the tiny 8-seater propeller plane out to Ptown. But on this trip I decided to ride Amtrak's Acela from New York City to Boston and then take the "fast ferry" (no comments please) provided by Bay State Cruise Company to Provincetown. The boat ride is just an hour and a half and they're clean, comfortable, have inside and outside seating plus a cafe and bar!


Dizzy Note: For those of us with inner-ear problems flying can be a nightmare. The train is much more enjoyable. Plus there is no scanning of luggage, there's much more leg room, free Wi-Fi and electrical outlets at each seat. You can walk around and there's a cafe car. It takes about the same time as flying when you factor in cabs to the airport, advance time you need to allow for check-in and it's less expensive.


Hotel Note: And instead of rushing from the train and connecting with the boat, my travel companion, Bud Santora and I, decided to spend a night in Boston at The Taj (now my fave hotel in Boston) located on Arlington Street.


Arriving in Bean Town's South Station at about 2pm, it was pouring rain. After a quick cab to the hotel, we checked in and discovered a gorgeous room waiting for us overlooking  Boston's Public Garden. 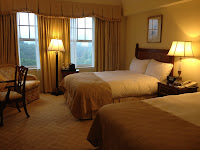 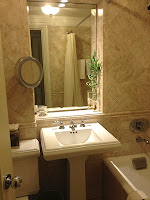 Without even unpacking, we headed down to the Taj Bar and lounge for smart cocktails and just a little food to tie is over till dinner. 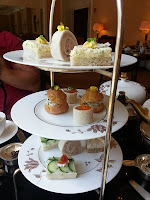 We could have sat down at a table and looked out at the park and order any of their traditional afternoon "teas", which include scones, sandwiches and canapes, but we opted to sit at the bar and order from their menu.

The only thing better than the artisan flatbread special of the day and of course a bowl of clam "chow-dah" (it is Boston, after all) was Eddie Foster, our bartender. Friendly, informative and funny, you must drop by and say hello to him the next time you're in Boston.
With umbrellas in hand, we ventured out to do some window shopping along Newbury Street... 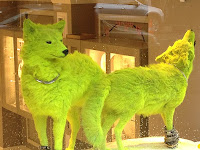 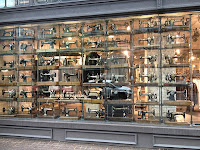 and then crossed over to Commonwealth Avenue Mall. Commonwealth is a broad boulevard and has always felt very European to me. There are nine sculptures and monuments along the center garden walkway sandwiched on either side by stunning residential properties.

This one in particular is of Samuel Eliot Morison, America's foremost maritime expert, Harvard Professor and winner of the Presidential Medal of Freedom. Walking back towards Arlington Street we entered the Public Garden and came upon the Ether Monument.

Probably unnoticed by many, one of its inscriptions reads: To commemorate that the inhaling of ether causes insensibility of pain. First proved to the world by Mass General Hospital in Boston - 1846. Hallelujah! I'll drink to that!

Drenched, we made our way back to the hotel to rest a bit, changed and then headed out the door for dinner. Boston is a foodie's delight. There are so many spots to choose from––places I love and even more that have been suggested by friends––but Bud and I decided to stroll a bit and see if some new and different place grabbed our attention. The rain had stopped, it was Friday night and suddenly the sidewalks were bustling with people all searching for the same thing: a great restaurant.

We could have gone traditional New England fare but instead we surprisingly ended up at Vlora. 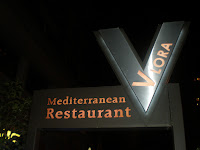 Located at 545 Boylston Street, Vlora is named after the chef and owner Aldo Velaj's hometown in Albania. Dishes also reflect recipes found in Greece and Southern Italy. Still a bit full from the taste treats we had at The Taj, we kept it light.

I ordered mussels steamed with white wine, shallots, lemon juice, parsley and garlic. Such a simple recipe but when done correctly, simply sublime. Plump, fresh mussels and a gazillion of them. (They could bottle the broth and make $$$$!) 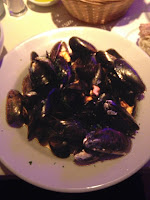 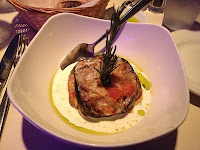 Chased with martinis, it was perfect and completely unexpected. I definitely want to go back and try the Flaming Saganaki - their special frying cheese flambéed with brandy!

And what better way to end the evening than with a trip to L. A. Burdicks, Handmade Chocolates? 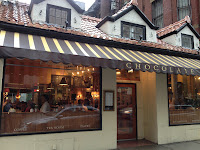 But it's not just chocolate bon-bons. Try any of their specialty drinks or enjoy the Zuger Kirsch: vanilla tea cake with Kirsch and butter cream or their Hazelnut-Orange Cake: hazelnut flour cake enrobed in gianduja.

The next morning the sun was shining brightly and after coffee and muffins, it was a quick walk through the gardens. And there they were, just as I remembered as a kid, The Swan Boats. 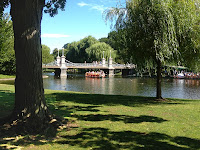 I think I even see all my ducks in a row! 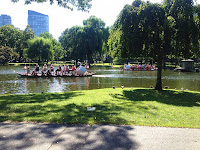 And walking back to the hotel was none other than "A One Man Band." What he lacked in talent, he made up for with enthusiasm. 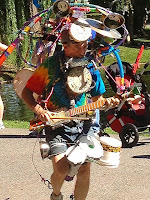 It was a great but short trip to Boston but now we had to head to the ferry and off to Provincetown!