My first recollection of Provincetown was a trip I made with my grandparents when I was a wee lad.

I clearly remember the store where we bought salt water taffy and fudge....

and the warm fried dough dusted with powdered sugar we purchased from the Portuguese Bakery... 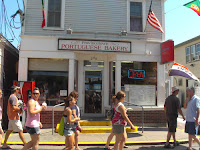 and that we spent hours vicariously navigating our way out along the stone causeway connecting the mainland with Long Point, the absolute fingertip of the Cape. 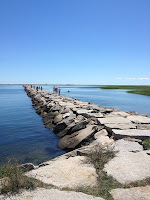 And as you can see, the same candy shop, the same bakery, and the same causeway still exist. Plus a whole lot more!
Thirty years ago when I was twenty-eight (please don't do the math), I started traveling back to this land of literary, culinary, theatrical, artistic, and "anything goes" paradise again. It was 1983 and my dear friend Sam Rudy and I, were invited to spend Thanksgiving at Karilon House with Karen Katzel and Ilona Royce-Smithkin, the celebrated artist. But this wasn't just any Turkey Day, we had to play parts! 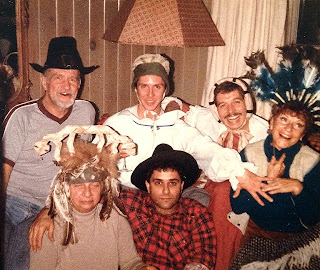 As you can see, even back then, gender-bending was happily accepted. Front row left is Karen in some sort of homemade chieftain headdress and with his arm around her is Fred Abdella. Back row is Mickey (?), followed by me as Priscilla Mullins - Mayflower Pilgrimess extraordinaire. Next is Sam as I think Hester Prynne from The Scarlett Letter. (Yes, she appears 22 years later but there is a great resemblance, especially with Sam's mustache.) And on the far right is Ilona looking a bit more like a Brazilian carnival dancer than a Native American. Karen is now 91 and Ilona, a mere 93. 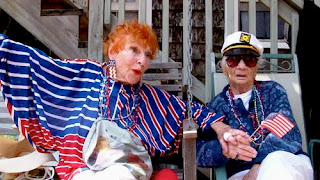 Notice that Karen is wearing the same expression on her face. So is Ilona, for that matter! In 1985 Ilona asked me to sit for her and she did my portrait. Last year when I visited for the summer she shocked me. I had forgotten all about the drawing and...she gave it to me. Truly, I will cherish it forever. 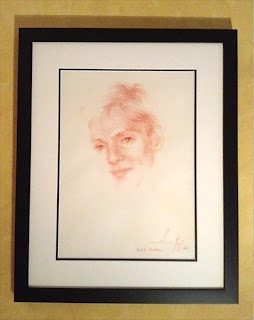 Ilona is still painting and sketching and she is featured in Ari Seth Cohen's book Advanced Style, a book devoted to (mostly) women 60+ who "live with grace and panache, marching to the beat of their own drummer." So, she's not only a style icon now and the new face of Karen Walker eyewear...

she also does a show, The Eyelash Cabaret, which she performed the week I was there, at the  Provincetown Art Association and Museum with the brilliant Zoe Lewis at the piano.

Ilona sang, shared witty and irreverent stories, and put on a fashion show. Plus, at the end of the performance she sketched an eye, right before our very eyes, which was then auctioned off with proceeds going to the museum. It's called the Eyelash Cabaret because she is famous for her amazingly long and beautiful eyelashes which she makes out of her own "vibrant" hair. She was magnificent. (They also do their show together in New York City at the Laurie Beechman Theatre.) She's so fabulous I based a lead character in my novel Fruit Cocktail upon her. (I think I just plugged myself.)

Just two doors down from Karilon House is Poor Richard's Landing. Originally built in the 30s by a Portuguese family, the cottages were a haven for artists and writers, and they still are! Check out all their accommodations on their website. Last year I stayed in cottage #10, a two-story house at the end of the pier. It was magical.
Sarah and Diane manage Poor Richard's and are terrific hosts, eager to help you. The property also includes the Captain's House, which has a two bedroom apartment on the second floor and the "Crow's Nest" on the third, where travel mate Bud Santora and I stayed. We had a spectacular view of Poor Richard's wharf and the cottages to the left and right, and the bay beyond. The sunsets were breathtakingly beautiful.


As soon as I set foot in P-town, I need my lobster roll fix! Everyone loves The Lobster Pot. And so do I. But it's become so popular, it's a bit manic. My preference now is Pepe's Wharf, both for their lobster roll and the ambiance. (For lunch, you always get a great table waterside a little later in the afternoon.) Ours was right on the edge of the bay. And Bud's crab cake was awesome.


I don't think I've seen as many shows in Provincetown as I did on this trip. And before several of them, Bud and I frequented my favorite place for a smart cocktail before starting off the evening, the Harbor Lounge. With a pier that stretches out into the bay, it's comfortable, classy and the drinks are fantastic.


An unexpected delight performing at The Post Office Cabaret and restaurant were the Seattle based Atomic Bombshells hosted by Ben De La Creme. 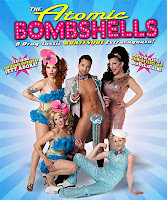 Not only did they have me in tears of laughter, they are really great burlesque dancers. Not to be missed is Jett Adore's peacock number! 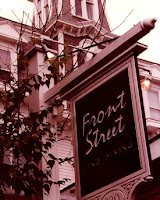 And for dinner after the show we visited a restaurant I've known about for years but had never tried, Front Street. Wow! On many levels.

Dizzy Note: For those of us with hyper-sensitive hearing due to inner-ear imbalances, (or even if you don't have ear issues) the noise level in this charming but popular and packed restaurant is so loud, you may have to read lips to understand each other.

Having said that, the food was off the charts good. Some of the dishes we tried were...
This is just the tip of the Provincetown iceberg. Coming up in part two are more restaurants, shows, museums, concerts, hat parties and meeting up with a childhood friend for the first time in forty-two years! 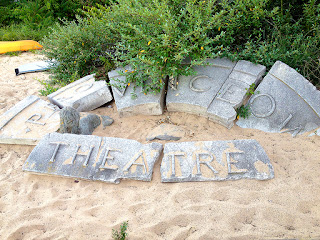