Just a note from Provincetown Part 1 - the one and only place I love to stay at now is Poor Richard's Landing historic wharf and cottages.

A few weeks before my August trip to Provincetown, a former school chum of mine, Michael Maren, posted a pic on our Andover, MA hometown Facebook page.

This is our graduating class at West Parish Nursery School, 1960. I'm front and center and Michael is just two to the left. Last time I saw him was in 1969 so of course I was curious to find out what was going on in his life. Turns out he's a journalist/screenwriter/filmmaker and his latest creation is the feature film A Short History Of Decay. Just hitting the festival circuit now, I had the honor of a sneak peek and it's really wonderful. It's both humorous and heartbreaking and Linda Lavin's performance, in particular, is sublime.

So we decided we must get together in NYC and catch-up after he gets back from an out-of-town trip. Where? Provincetown. And it turns out he was going to be there the exact same week I was. Talk about synchronicity! Not only did we have a chance to meet up several times, but his wife, Dani Shapiro, the celebrated author, was teaching a creative writing workshop at the Fine Arts Work Center.

One evening was devoted to her reading from her upcoming book Still Writing, which was accompanied by a viewing of the work of the incredibly talented photographer, Amy Arbus. The two women followed up with a conversation about their work and "creative processes" resulting in a stunning evening of literature, art and humor.


Speaking of art, Provincetown is the oldest artist colony in America and currently boasts over 75 galleries. Two of my favorites are the  Schoolhouse Gallery where Amy Arbus is currently being exhibited

and the Packard Galleries, which celebrate the works of Anne, Cynthia and Leslie Packard. Most of the galleries are located on Commercial Street. Although the East End is chock-full of them, you'll find a scattering of them in the West End too, heading towards the marshlands and the beaches.

As busy and populated as the East End is, the West is a bit calmer and more remote. Out that way is another pier, similar to Poor Richard's Landing, that stretches out into the bay peppered with cottages for rent called Captain Jack's Wharf. One season I stayed there. It's such a mishmash of magical structures, it felt a bit like where Popeye and Olive Oyl might live.

Located nearby at 93 Commercial Street is the fantabulous Relish. They make the best sandwiches in town and although I didn't try any of the sweets myself, people rave about their cupcakes and desserts. 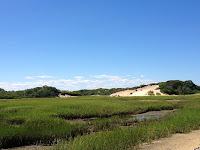 If you keep walking west you'll end up where the Pilgrims aboard the Mayflower first landed in Provincetown in 1620. There's a small rotary/memorial that's a perfect spot to eat your lunch. And you have a terrific view of the marshlands.
Only one day during the week's stay did it rain. So my travel mate, Bud Santora and I, decided to play "tourist." We proudly bought our tickets and hopped on board the Provincetown Trolley!
Excursions leave in front of Town Hall on the half-hour during season and last about 40 minutes. Not only did we delicately navigate ourselves carefully along Commercial Street as our driver described things left and right, but we also zoomed out into the 4,000 acres of the National Seashore. This is great for anyone without a car or not bicycling. And we learned tons of new information.

For instance, I didn't know that in 1818, out on Long Point, the sandy tip of the finger of the cape that is now accessible by walking out along the mile and a half stone causeway, there used to be an entire village of houses, including a school and a post office. It's still a mystery as to the exact reason the villagers started leaving Long Point around the mid-1800s but eventually the town was abandoned.

Most of the homes, about 30 in all, were floated back over to the mainland on rafts. These houses are now historically marked with a blue and white plaque of a house on a raft floating on water. 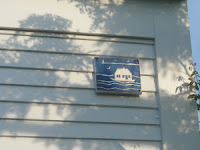 This house to the left, that was floated back, was the home of Donald Baxter Macmillan. Born in Provincetown in 1874, this teacher/lecturer/explorer made over 30 expeditions to the artic including one with Robert E. Perry. In fact, Macmillan Pier is named in his honor.

We also learned on our Trolley trip that the Pilgrim Monument, whose first cornerstone was laid by President Theodore Roosevelt in 1907, is the tallest all granite structure in the United States. Just over 252 feet high, it's a dizzying climb. Trust me, it is a workout.


Dizzy Note: Speaking of a dizzying climb, for those of us with inner-ear imbalances, which often dance with vertical and horizontal vertigo, the walk downstairs can often be more challenging then the climb up. I find it's very helpful to not only hold onto the railing with each step, but if I rest the side of my body against the railing, when possible, and slide along it, it gives my brain an added sense of where I am in space.

From November 27, 2013 through January 5, 2014 they string 3,500 white "landing lights" from top to bottom on the memorial, to celebrate the Pilgrim's first arrival. Some say that on a clear night you can see this holiday beacon all the way from Boston.

And there were so many shows going on the week I visited!

Varla Jean Merman aka Jeffrey Roberson is a figurehead of the summer lineup. His shows are hysterically funny, well written, and he sings live - no lip-synching. Jeffrey has appeared on Ugly Betty, All My Children and Project Runway. He played Mary Sunshine in Chicago on Broadway and starred in Lucky Guy Off-Broadway. He's also performed at Carnegie Hall, The Sydney Opera House and - for my UK readers - soon will partner up with Well-Strung and play the Leicester Square Theatre in London.

Renaissance woman and humorist Kate Clinton is a staple of Provincetown entertainment, particularly at the Crown and Anchor. She's currently sharing with the nation her Sis-Boom-Bah Tour and as always, her show is funny, smart, current, and a bit political. She's a comedian, an actress, a columnist, a TV commentator, an author, a blogger, a vlogger...what hasn't she done? Maybe she should run for president! 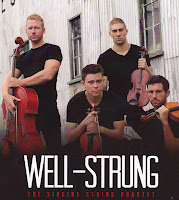 Well-Strung. Wow! These men are such talented musicians - not only with their stringed instruments - but they sing too! Brilliantly. And did I mention, each of them in their own way, is sexy, adorable, and unique? Edmund Bagnell, Christopher Marchant, Daniel Shevlin and Trevor Wadleigh offer a face paced, moving performance and a wild ability to mash classical music with pop. Think Vivaldi's "Four Seasons" shaken, not stirred, with Brittany Spears' "Toxic." Breathtaking!

And of course there's a special nod to my LGBT community. Going strong as usual are all the bars and clubs...The A-House, The Gifford House with the Porchside Lounge and Purgatory, The Vault, Pied Bar  and Tea Dance at the Boatslip, just to mention a few.

And to end on a delicious note - my absolute favorite new discovery in P-town is - SAGE located at 336 Commercial Street.

The brainchild of Diane DiCarlo and Jeanne Leszczynski, Sage is an inn and lounge that is open 12 months of the year. It was so good, we had to visit twice. The space is beautiful, almost spa-like, and Chef Lucio Garnica and his wife and pastry chef, Alana Coimbra, create some of the most delectable taste treats. 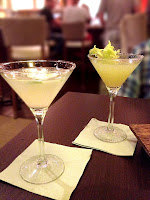 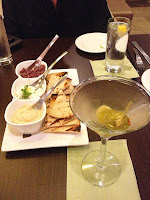 Their nibbles are scrumptious. Here is the meza trio with herbed goat cheese, classic hummus and olive caper tapenade with grilled pita.

Next we tried two different flatbreads dujour - the smoked herb oil, micro greens, mozzarella and parmesan...and the prosciutto, grape tomatoes and fig. My mouth is watering as I type this.

the eggplant frites with curry chive aioli. I could have eaten three servings of this riff on traditional french fries. 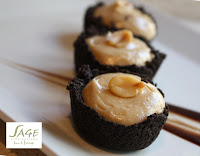 Last but certainly not least are Alana's mini peanut butter pies! Oreo crusted, peanut butter, cream cheese cuties...they are melt-in-your-mouth sinfully good. And don't forget to try her carrot cake. Oh...and I just discovered they are offering cooking classes this fall. I better look into this!

I also want mention, in Diane and Jeanne's own words..."In the off-season, Sage will offer a special welcome to participants of courses and programs offered by Ptown’s creative arts and natural science organizations. We aim to fill our Inn with artists interns, students, and scientists and foster an off-season arts and education industry in this truly unique and special place." Talk about paying-it-forward. 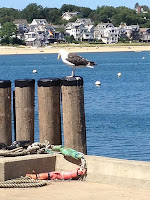 The only sad thing about Provincetown...is leaving. But there's next summer to look forward to. But treat yourself and experience this rich and artistic community off-season too. It's beautiful year-round.