I often find that appetizers in restaurants are more delicious than the entrees. Plus they're less expensive! Frequently, I'll treat regular restaurants like tapas bars, hitting a few places in an evening.

Hotel Options on the Upper West Side: The Lucerne Hotel

Joining me at Edgar's was my friend, designer and artist, Nancy Perkins. All of her work is beautiful but I treasure this simple oil painting of a pear that she gave me. 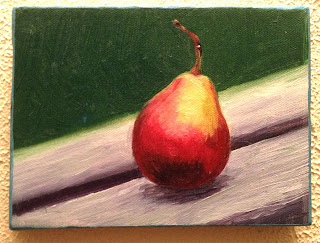 Here's a little info from Edgar's website: "The cafe originated on the former site of the Brennen Mansion located on 84th street between West End Ave and Broadway known as Edgar Allan Poe Street. Edgar Allen Poe resided there from March 1844 to August 1845 at which time he wrote and gave to American literature 'The Raven'." The decor is eclectic to say the least. 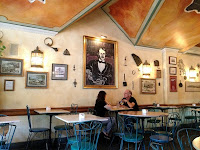 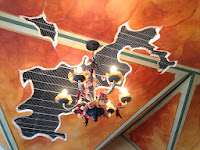 And while enjoying a glass of the Contessa 2009 Pinot Grigio I devoured their goat cheese with shaved beets and roasted pine nuts served on an 8-grain bread served with a mixed green salad.

Meanwhile Nancy tried their Le Fumees Blanches 2010 and paired it with a decadent slice of German chocolate cake.

Edgar's is open, casual and the menu is as colorful as the decor. And for my Jewish friends, many items on the menu are Kosher, including some wines.
Note: Cash Only!

Hotel Options in the West Village: The Marlton 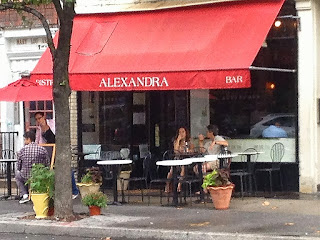 Recently I was invited by my dear friend Greg Allen to a private screening of the new Indie film Illness: The Movie. At his suggestion we met up at Alexandra's beforehand to catch up on all the crazy and glorious things going on in our lives. 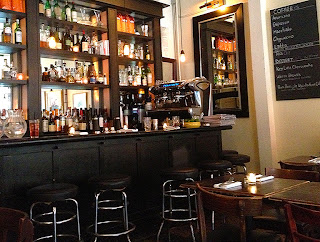 Greg ordered his usual dirty martini while I had a sauvignon blanc and together we shared a portion of their calamari sauteed in garlic, bread crumbs, lemon and parsley.

Normally I only like squid if it is disguised in batter and deep-fried but this was insanely delicious. Soft and so wonderfully garlicky, if we had had more time, I would had ordered several other small dishes at this quaint restaurant. Can't wait to go back. 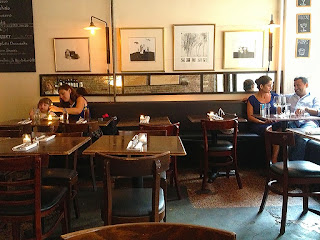 Note: Amex or cash only!

Hotel Options on the Upper West Side: The Hotel Beacon.

I love Buceo 95, which happens to be a "true" tapas bar.  The waitstaff, bartenders and owner are so friendly. Everything I've tried on their menu is divine and their extensive wine list is exceptional and reasonably priced.

Joining me at this restaurant was Bud Santora. He illustrated our children's picture book Wise Bear William and has written a sci-fi fantasy novel, The Green Storm, which launches November 2013. Sitting at the bar we ordered a bottle of the Cvne Monopole Rioja Blanco 2012. It was light, crisp, floral and bursting with citrus.

The rioja was the perfect pairing with their Berenjena - baked eggplant, roasted garlic, velvety tetilla cheese and toasted bread crumbs. It's so luscious draped over their freshly baked bread. 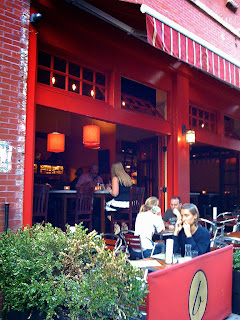 Dizzy Note: For those of us with compromised balance issues due to vestibular or Meniere's disease, when sitting at a bar it's best to sit on the corner (if they have one) therefore reducing the amount of head-turning you have to make if you're dining with a friend(s). Last thing we want, when out and about, is triggering off vertigo. 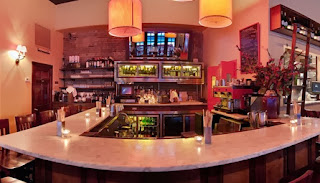 Treat yourself and take this beautiful virtual tour of Buceo 95. Whether it's a quick pintxos (snack) and glass of cava in the early evening, a full dinner of small plates, a nightcap on your way home or possibly churros with bittersweet chocolate sauce for dessert, drop by and you'll truly feel transported to Spain.