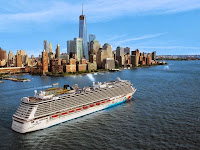 After two days at sea on Norwegian's newest ship the Breakaway and discovering everything it had to offer, it was time time for a few ports of call and a variety of excursions. The first stop was Port Canaveral, FL. 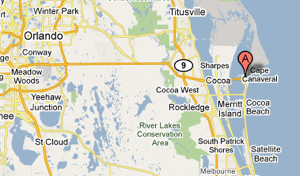 There are a multitude of things to do not too far from the ship. 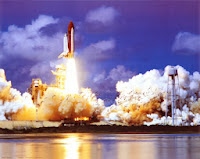 You can visit the town of Cocoa Beach, probably most famous for being home to Major Anthony Nelson (Larry Hagman) on the I Dream Of Jeannie television series. But from here you can also visit the Kennedy Space Center.

And if you don't mind the longish bus ride, you can go to Disney World and Sea World in Orlando. Both can fun but exhausting trips considering we were only spending about 8 hours in port.

Dizzy Note: You can also kayak, zipline and speed along glades in airboats but trust me, if you have balance issues like I do, you're going to be out of whack for quite a while afterwards.

Hotel Not: If looking for hotels in the Cocoa Beach area check out: The Inn at Cocoa Beach

On this trip I decided to take a ride on a pontoon boat that gracefully made its way along the Banana River. It also gave me a terrific chance to take better photographs.

Not far from the port, the river is actually a lagoon and only waist deep with brackish water. And we learned that brackish means a mix of salt and fresh water. But the river is lush with over 5,000 plant and animal species. Mangroves, salt marshes, sea grass beds, stingrays, dolphins, and manatees are just a few. 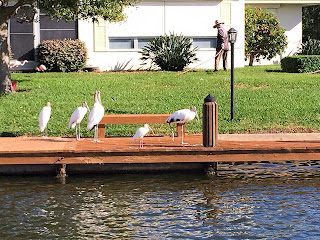 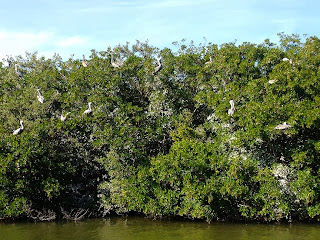 Pelicans were abundant and I had never seen them roosting in mangroves before.

We were lucky enough to see dolphins several times.

*Note: If you are viewing this blog in an email, you probably will not be able to see the vids. But if you click-thru to the blogsite, you can.

Here's a single dolphin jumping. He came out of no where so I was pretty surprised that my camera was aimed in the right spot.


And two playing and flipping around on their backs in the water.


The only disappointment -  there were no manatees to be seen. 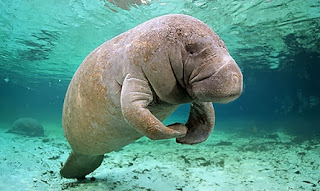 Several days earlier there were many but the moment the water temps go below 68 degrees they head to inland waterways that are warmer. I love manatees and you can adopt them! Makes for great gifts. Adopt A Manatee.

That night, back on the boat, we went to see Cirque Dreams  and Dinner -  Jungle Fantasy in the Spiegel Tent. Modified from the circus show that played on Broadway, acrobats, contortionists, aerialists, jugglers, and more showed off their skills, some of them quite death defying while we onlookers tried to digest a three course meal. The talent is amazing and right in your face but I wondered if it would have been a better idea to eat first and then see the show. Often I was conflicted; should I cut and chew or clap and shout? 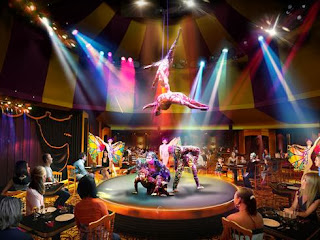 Our next port of call was Norwegian Cruise Line's own private island in the Bahamas, Great Stirrup Cay. 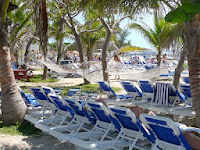 It's a tiny island reachable only by tender boat. There's a beach and outdoor restaurants/bbqs/bar areas and plenty of activities like parasailing, kayaking, snorkeling, as well as jet skiing. Or you can just grab a lounge chair or hammock and dose off. A little something for everyone. But the best part is, when most cruisers jump ship to the island, the boat is quieter and the spa offers discounts for massages, facials, and all other types of services.

Our third port of call was the capital city of the Bahamas, Nassau.

Hotel Note: If wanting a hotel in Nassau check out the highly rated: Island House

With just one day to explore, we packed in as much as we could. An escorted trip around town took us to the Fort Fincastle and behind it, the Queen's Staircase, named in honor of Queen Victoria. 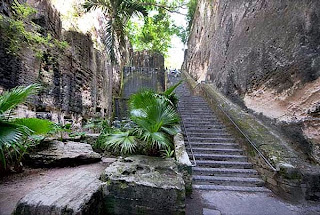 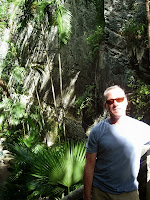 And then it was a trip to the Ardastra Gardens and Zoo. There were Madagascar lemurs, Bahamian boa constrictors, and jaguars as well as peafowl (peacocks), Lory parrots . . . 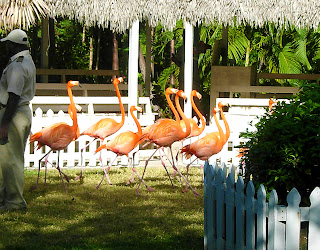 and marching Caribbean flamingos! They actually did march on cue as a very orderly group. Strange but beautiful and they were very friendly (not like that parrot)! 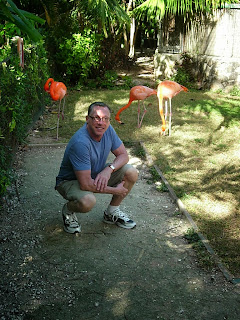 And then we dashed over to the Atlantis eager to see their aquarium.

There were all types of sharks, stingrays, eels, turtles, and fish but my favorite were the jellyfish. I HATE these creatures when they sting you in the ocean but in this environment, you could see how amazing and elegant they are. 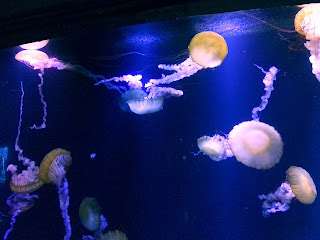 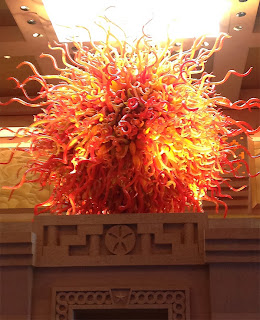 The casino at the Atlantis had some really fascinating blown glass artwork.


An added bonus was stumbling upon Todd English's restaurant Olives. 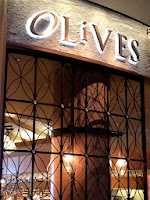 My travel mate, Bud Santora, and I sat down for a great lunch consisting of calamari fritti with spicy lemon aioli and - get this - the Arthur Avenue flatbread (roasted tomato, mozzarella, basil). We chased it all down with a couple of glasses of very chilled Pinot Grigio. Perfecto!

Once we were back on the boat it was another two days at sea as we made our way up the eastern seaboard . . . 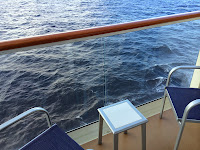 but leaving the Bahamas I caught a glimpse of this rainbow. 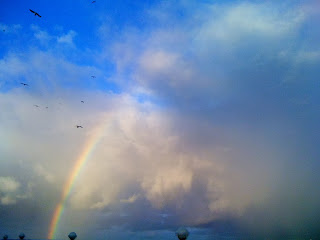 There were still plenty of shows to see and restaurants to explore but one bar we kept going back to was Maltings. It also happened to be where most of the entertainers - the singers, the dancers, the acrobats - on the ship gathered when they weren't working, which was pretty . . . entertaining. 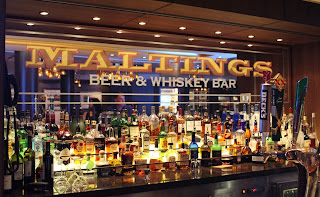 The bartender's name was Augustus and when you find someone this friendly and enjoying his job this much, it can really make the trip. One day he had a mojito tasting. Actually it was a tasting of 5 different mojitos ranging from - raspberry to coconut. And Augustus morphed into his alter ego, Moji from Cuba. 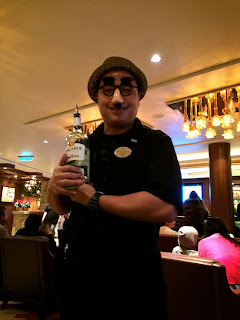 With all the specialty restaurants on board I still think my favorite was one of the main complimentary choices, the Manhattan Room. The food was really terrific as was the ambiance. 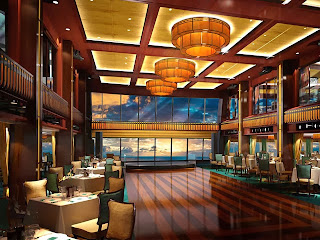 It had a supper club feel to it and there was a band playing during dinner service. But doesn't it kind of look like the main dining room in the movie The Poseidon Adventure? You know, the one where Shelley Winters, Ernest Borgnine and Gene Hackman fight to stay alive after their cruise ship flips over, upside down. I loved the theme song, The Morning After sung by Maureen McGovern. I was aching for the band to play it but not surprisingly, the song is banned from being performed on the ship. I thought it would be funny. They didn't seem to share my sense of humor. 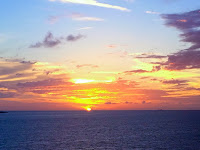 And before we knew it, we were back in New York City. 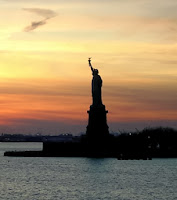 Dizzy Note: With my vestibular challenges, every day, every step I take, it feels as though I'm on a ship at sea during rough weather. Ironically, when I'm on a boat, the sensation is canceled out.

When I tell friends that I really enjoy cruise ships, many shiver and say they would hate the entire trip. But interestingly, these are usually people who have never taken a cruise before. I know, I know - it isn't for everyone. But there are certainly enough people who enjoy it . . . to keep the industry afloat.