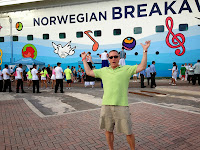 Eight months ago I purchased a deep discount balcony cabin aboard Norwegian Cruise Line's newest ship, the Breakaway. My travel partner in crime, Bud Santora, joined me and we left from New York City. I love jumping into a cab and in ten minutes being at the ship. The trip was seven days long  - December 8th - 15th - with stops in Cocoa Beach/Cape Canaveral, Fl, Great Stirrup Cay (NCL's own private island) and Nassau, Bahamas.

Dizzy Note: Prior to having vestibular disorders I never felt claustrophobic. But now, my spatial awareness is compromised and enclosed spaces can make me feel panicky and there's a sensation that physical pressure is pushing down upon me. That's why it was important to book a balcony room. (I found out the hard way on a previous cruise without a balcony.) Even if I didn't spend a lot of time out there, which I did, it still gave me the visual sense that I wasn't boxed in. 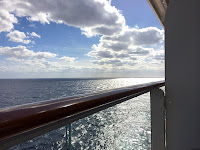 The Breakaway is a beautiful ship and being so new, there was barely a scratch. But it's very large. It carries approximately 4,000 passengers and 1,700 crew members. The ship was sold out, packed solid. I was a bit surprised with the number of "school-aged children" on board. Aren't they supposed to be in school? 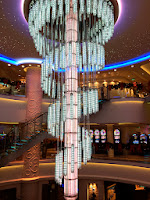 A week before sailing I noticed that my cabin was even more deeply discounted then when I purchased it in May. I contacted my wonderful cruise coordinator, Robert Cook at United Cruises, (mileage people, mileage) and mentioned to him that I kind of wished I had waited till the last minute to buy the ticket. Robert made a quick call to NCL and although they wouldn't offer a financial discount, they did upgrade us to a suite with a balcony. More space. Woo hoo!

And what a time to choose. New York had its coldest week this year plus snow but the weather on the cruise, except for the first day/night, was simply gorgeous.

The first two days were at sea which gave us a chance to really explore the ship and all that it had to offer.

There's a gym, spa and a casino where I managed to eek out a $90  winning.

There are several pools, a rock climbing wall . . .

There are several bars including the Ice Bar where you don a faux fur hooded poncho and see how long you can down martinis till you freeze your tookus off.


The main stage theatre offers productions like Rock Of Ages, straight from Broadway. I believe the next show that will be on board replacing Rock Of Ages is Legally Blonde.


Buddy Valastro of the television show Cake Boss has a bake shop on board and there's a comedic magician, Michael Finney.


Daily there are thousands of things going on like wine tastings, kickboxing seminars, games cruisers can participate in, behind the scenes tours of the boat, origami classes, ballroom dancing lessons, etc., etc., etc.! Phew, I'm exhausted just listing all of this. Heck, you can even get Botox in the spa! Hmm, rolling ship at sea plus needles full of paralyzing venom - I think I'll skip this one. Wouldn't want them to miss the mark. 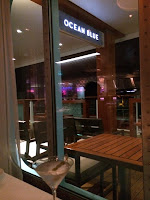 The Breakaway also has many different complimentary dining options along with several specialty restaurants that require an additional surcharge. One such specialty option is Geoffrey Zakarian's seafood restaurant, Ocean Blue. 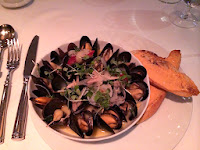 and the Fried Chickpea Salad with iceberg lettuce, Castelvetrano olives and English cucumber.

And for main courses we ordered the Dover Sole, whole roasted with sauce Meuniere

For dessert we opted for their their Artisanal cheeses. Everything was delicious and the service impeccable.

They also offered us a complementary bottle of Santa Catalina Chardonnay (Chile) with dinner but we passed on it since we were drinking martinis. And surprise, they gave the bottle to me and said, "Enjoy it on the trip." I've always been a fan of Mr. Zakarian's, whether watching him on Iron Chef or Chopped but found it ironic that the first time I dined at one of his restaurants was out at sea in the middle of the Atlantic Ocean.
That night we saw Burn The Floor - a non-stop sizzling show of professional ballroom dancers accompanied by two singers and a band, again, fashioned upon their Broadway run. Truly amazing especially since their stage was moving all over the place, like the ship. I'm surprised no one fell. I lost weight just watching them dance so hard and fast. 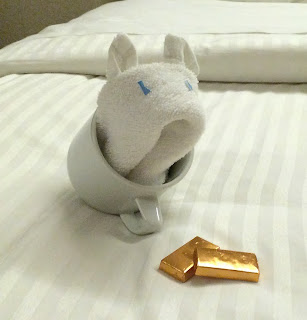 Coming up next in Breakaway - Part 2 - The Banana River, FL with dolphins - Cirque Dreams Jungle Fantasy - Nassau, Bahamas with trained flamingos, the Queen's Staircase, and the Atlantis aquarium plus Mojito tastings! (I need a vacation after this vacation.)