Upate: Sadly, this fantastic production has closed, but there's still loads of info in this blog.

Tap don't walk to see Dames At Sea on Broadway at the very intimate Helen Hayes Theatre.
240 W 44th St, New York, NY. And if you're coming in from out-of-town and need a hotel, check out the very eclectic CitizenM Hotel plus many others in the theatre district. The current Broadway cast includes Eloise Kropp, Lesli Margherita, John Bolton, Mara Davi, Danny Gardner, Cary Tedder and was directed and choreographed by Randy Skinner. This show holds a special place in my heart because it was my first musical production I was cast in at college, UMass, back in 1974. 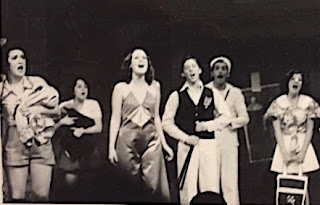 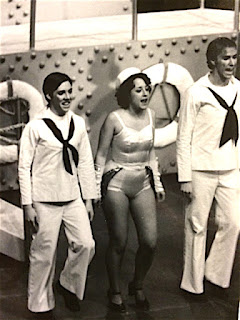 I loved the show and especially the cast, but never had a chance to see Dames At Sea...until recently. There is so much talent in this little show about making it big on Broadway. The singing, the dancing, the comedic timing is flawless. Audience members were applauding the moment the orchestra started playing and before the curtain went up.


Some critics say it's dated...well of course it's dated. It was written in 1968 and it's spoofing 1930s movie musicals. It's supposed to be dated. But this production is so fresh with energy and comedy.  I haven't laughed this hard at a Broadway show in ages. It's basically about a girl who gets off a bus with only a pair of tap shoes and she ends up starring in a Broadway show.


The book and lyrics were written by George Haimsohn and Robin Miller, music by Jim Wise and it was first produced Off-Off Broadway at Caffe Cino starring Bernadette Peters. It put her on the "theatrical" map. 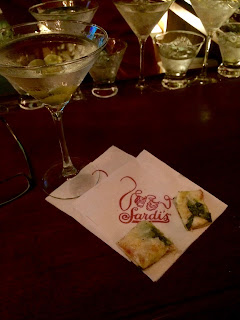 Many people don't know about the second floor bar but it's a fantastic place for pre-theatre food and drinks without all the craziness that's going on downstairs in the main restaurant. But you still feel you're a part of the tradition and excitement this establishment exudes. Sardi's opened in 1927 and as most know, it has hundreds of caricatures hanging on its walls, of Broadway stars. Plus upstairs they offer you free appetizers. You can't get better than that!

But after the show we tried a new restaurant around the corner, Bocca di Bacco.
635 9th Avenue
212-262-2525
We ordered the rather orange looking but delicious - Gamberoni - skewered jumbo shrimp with sauteed lima beans.

And an order of the salmone bocca di bacco - oven roasted salmon with carmaelized onion and french beans with a balsamic reduction.
Sorry this isn't a better pic but the onion jam was hard to photograph. Delicious and perfectly cooked, however I felt the onions were a little too sweet. Could have been fine with just half the amount. So you just slide them off!


But please support the theatre and in particular Dames At Sea. If you don't mind laughing and smiling so hard your face hurts, get yourself a ticket.