On November 11, 2015, HENRY'S restaurant, with the culinary expertise of their Chef Dave Ferraro, joined forces with Jonathan Oakes, winemaker and owner of Leonard Oakes Estate Winery and  offered a New York Wine Dinner, which is part of their Special Supper Series.

If in need of a hotel on the Upper West Side, check out Aloft Harlem or several other choices in the area.

NOTE: I want to mention that next up in this Special Supper Series, on Wednesday January 13th at 6:30pm, is “Rhone Rangers - American Rhone Varietal Producers.” It will feature the best of the classic GSM blend (Grenache, Syrah, Mouvedre) being produced in the States, primarily Washington and California. And see below for more events.

A five course dinner was prepared and paired with wines ranging from Rieslings to Merlots and some surprising wines I've never tasted before. "The" Henry of HENRY'S - Henry Rinehart - was on hand for this very special evening.

And when asked what the restaurant's mission was he said, "My primary mission at HENRY’s speaks to serving community and sharing this great moment in NYC history, where we have this incredible diversity of incredible food, drink, and service professionals. Our all-American wine program will be extended to the craft beer and artisanal spirits in the coming months. We are almost there but have yet to pour off the old stand-bys on the spirit side (Absolut, Stoli etc..). We are drinking ourself to greatness by representing exclusively American wine producers as the industry re-builds from Prohibition.

And joining us for the evening, describing the food we were enjoying and making sure everything was running smoothly, was the very professional and charming Irulian Dabbs. She is HENRY'S beverage director who put together this event from conception to performance. 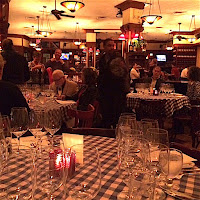 The great turnout was excited to start the food and wine tasting. By the way, HENRY'S Arts and Crafts style restaurant is beautiful, spacious, and one of my favorite restaurants on the Upper West Side. Unlike most NYC establishments, you're not sitting on top of each other and it has a very friendly neighborhood vibe to it.

Four generations of Oakes have farmed the same land in Medina, NY, located in the northwest corner of the state not far from Niagara Falls and Lake Ontario. Jonathan not only explained the wines we tasted but he also came around and sat at each table answering any questions we had.

First up was an Amuse Bouche - a fingerling potato with créme fraiche and tobiko (flying fish roe) with a garnish of chives. A scrumptious bite paired with a flute of Riesling Pétillant Naturel, un-filtered. It was refreshingly super dry. It was both delicious and cleansing, preparing our palettes for what was ahead.

Chef Ferraro then prepared Smoked Max Creek Trout with a celeriac slaw with apple, toast points and a horseradish cream. The trout was so fresh, had a great texture, and was subtly smoked. Both the celeriac and the horseradish cream offered a bright zing to the dish.

And the trout was paired with a Riesling Reserve, which was, again, wonderfully dry and crisp. I could definitely taste the citrus but there was an undertone of chalk in the back of your throat. I know it sounds weird but it wasn't. And I believe Jonathan explained it by saying that the soil up in Orleans County where the Oakes Winery is, has hints of limestone in it and it seeps into vines.


Next on the menu was I think my favorite food course of the evening - the Forest Napoleon - wild mushrooms, puff pastry, sunchoke (Jerusalem artichoke) cream, and truffle. There was so much crazy, wonderful flavor in this dish. And the pastry was light, crispy, and perfect. It made me think that if I had company over and someone was a vegetarian, this would be an awesome dish to prepare.

And Jonathan served us his Meritage - a blend of Cabernet Savignon, Cabernet Franc, and Merlot. Now that's a mouthful...and it was! Of all the wines we tasted, I felt this was the biggest and it paired beautifully with the mushrooms of the Forest Napoleon because it had an earthiness with a hint of berries...maybe blackberry?

Our next course was the Long Island Duck Breast au poivre served with butternut squash, farro and a green peppercorn-brandy sauce.

A beautiful dish, the duck was prepared perfectly and the sauce was so good, they could bottle and sell it! And our wine was the Blaufrankisch.

This was one of my favorite wines of the night. It danced beautifully with everything on the plate. It was strong enough to stand up to the duck and punched up the flavors of the squash, the brandy sauce, and the stunning farro. The grain was cooked and seasoned so nicely, I almost asked for another serving.

Our servers then brought out a sorbet palate refresher. Sorry I don't have a pic, I was enjoying it so much, I forgot.

We enjoyed a Nettle Meadows Triple Cream, a Grafton Clothbound Cheddar, and a Jersey Girl tomme style. Wow, not only great names but great flavors!! They all tasted amazing combined with the walnut raisin bread, toasted almonds drizzled with honey and the sumptuous port fig compote. And the wine paired with the cheese board was the Vidal Blanc 'Orange Wine'.

I had never had an 'orange wine' before. The Oakes take late-harvested vidal blanc grapes and then allow them to ferment for five weeks on the skins. It's definitely fruity and on the sweet side with hints of apricot and maybe tangerine but still an earthiness which paired wonderfully with the cheese board. And finally we were treated to the Baked Apple Flowers.

A flaky pastry filled with apple and toasted caramel was a perfect finale for the evening. And the wine served was Leonard Oakes 'Ice Wine.'
I apologize - I was enjoying both the Apple Flower and the 'Ice Wine' so much that I forgot to take a snap of my glass. Or maybe all the wine we were enjoying caught up with me! Ice wine gets its name from grapes that are frozen while still on the vine. And the freezing happens before the fermentation, not afterwords, and the end result is a very complex sweet dessert wine. Exploding with fruitiness it was a perfect choice to drink with the toasted caramel and apple.

What a fantastic evening with a very friendly crowd of people and presenters.

More Events: HENRY'S (calendar) will be hosting a Thanksgiving dinner from 12:00pm - 9:00pm and on Christmas Eve is their Feast of the Seven Fishes.

And for you music lovers there is HENRY'S Sing For Your Supper Series on Dec 14th - A Goyische Christmas to You. An evening of Christmas songs written by Jewish composers. (Aren't they all?)


Whether you're attending one of their special events or just dining at HENRY'S, you'll enjoy their fantastic menus in beautiful surroundings coupled with great service.