I'm lucky enough to stay with family in the Twin Cities area but if you need accommodations The Saint Paul Hotel is highly recommended. There are plenty of other choices thru the link, too.

On a recent trip to the Twin City area for Thanksgiving, I arrived mid-afternoon on a Tuesday and stopped by Emmett's Public House in St. Paul with my brother John. Thinking it looked like a nice upscale Irish pub, I entered with a hankering for a good Shepherd's Pie. Boy was I surprised. 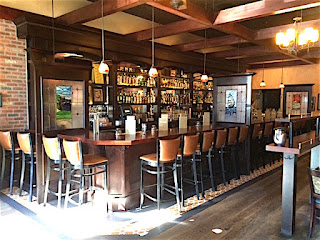 A beautifully renovated space, the bar is a perfect place to meet up with friends for a pint or whiskey, especially during St. Paul and Minneapolis' infamously cold winters. But two days before Thanksgiving 2015, it was bright and sunny and actually warm. 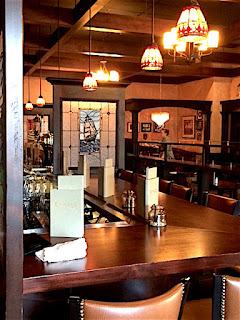 They have plenty of room for large groups and parties, but we chose a sunny booth in the front.


But the star of the show is the food! Surprisingly great food! Emmett's takes typical (and not so typical) Irish fare and bumps it up 10 notches by adding twists of their own. Here's a look at their starter menu. I was tempted to try everything. 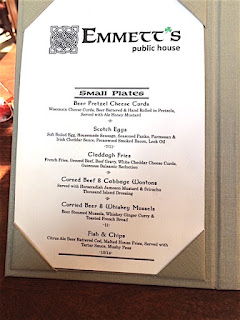 We decided upon the Corned Beef & Cabbage Wontons.

Served with two different sauces - a horseradish Jameson mustard & a sriacha thousand island. The fried wontons were light and crunchy on the outside, creamy and oh so flavorful on the inside. I thought the Jameson mustard was brilliant - the pungent mustard paired with the Jameson was fantastic!

For entrées we ordered a special of the day . . .

. . . County Cork Cod Sliders - citrus beer battered cod with lettuce, tomato, shaved red onion, fresh squeezed lemon, tartar sauce and a flash of the sriacha thousand island on toasted slider buns served with a cup of white chicken chili. As you can see this was enough food for two people. But the citrus beer battered cod was so light and fresh, it was a perfect canvas for the sauces, tomato and onions. The hearty soup was had hints of cumin and chili powder, giving it warmth and punch. And from the large plate menu we ordered . . . 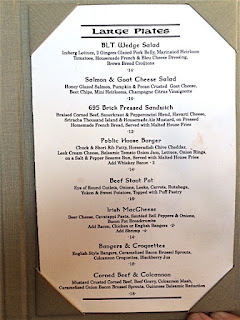 . . . the Beef Stout Pot - eye of round cutlets, onions, leeks, carrots, rutabaga, yukon & sweet potatoes, topped with puff pastry. Every bite was a spoonful of comfort food. This would be a terrific choice on a cold winter's night.


It may seem redundant after having the wontons but I had to try the Corned Beef & Colcannon. Mustard crusted corned beef, beef gravy, colcannon mash, caramelized onion, bacon and Brussels sprouts and a Guiness balsamic reduction. The word colcannon is from the Gaelic "cal ceannann," which literally means "white-headed cabbage." So the cabbage is sliced thinly, cooked al dente and added to the mashed potatoes. And a mound of this brilliant Brussels sprout mixture was heaped on top of the colcannon. The corned beef was fork tender and much like I remember from my childhood. Hey, I'm 25% Scottish and 75% Irish. I definitely qualify as a Celt!

Framed next to us in our booth was this picture of F. Scott Fitzgerald and his wife Zelda. She was pregnant in this photo with their only child, Scottie. Little did I know that F. Scott was born in St. Paul and the city is very proud to express their affection for him and his wife, Zelda. I can not finish this post without mentioning our charming and wonderful waitress, Sidney, who really made our visit quite special. My next trip back to St. Paul I'm making a mad dash to Emmett's Public House for dinner and a pint.