Recently I enjoying a filmed live version of the Donmar Warehouse/National Theatre's London stage production of Les Liaisons Dangereuses starring Janet McTeer, Dominic West and Elaine Cassidy at Symphony Space. It was a beautiful production with great camera work and superb acting. I would love to see this production live, on stage. And this was the most humorous adaptation of this story I have ever seen, but shooting live theatre for a film audience can often fall flat, as did this one. They are just two different beasts requiring different ingredients to work. 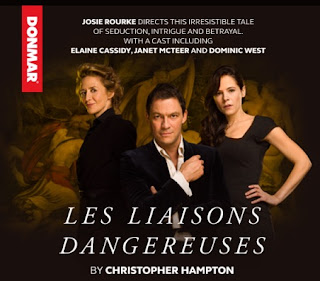 If visiting and desire a hotel on the Upper West Side, The Beacon, which also houses the very popular Beacon Theatre, is a great alternative. Thru the link, there's a list of plenty of other hotels in this area also. 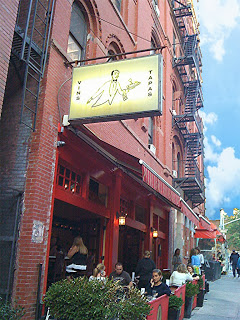 It had been some time since I had dropped into this beautiful bar/restaurant. The reason being, it had gotten too popular. It was always packed.

And anyone like myself, if you have vestibular disorders, loud (happy sounds) with busy, tight environments can wreak havoc with our balance issues. But this was 9:00pm-ish on a Sunday night and it was surprisingly quiet. Just 8 of us in the restaurant plus the waitstaff. I was delighted to see that my favorite waitress was still working there and after a big hug, she confessed that Sunday nights are always quieter. Who knew? I didn't. But now that I'm telling the world, I may have spoiled my discovery. There's my friend in the back and I've affectionately nicknamed her, River Song. For those of who watch the British television show Doctor Who you'll know why.


Preferring to sit at the bar, my partner in food crimes and I claimed our space and quickly ordered drinks. The restaurant has a beautiful and extensive wine list. My choice was their La Sorda, Rioja.


Buceo 95's menu is extensive and they always have daily specials. For two people I think two small plates and possibly a "larger" one is plenty of food. (Although the fellow sitting next to us dropped in to take an order home and I swear he ordered no less than 15 different tapas. Party!

It seems as though every restaurant nowadays is offering "small plates" on their menus but Buceo is the real deal. I speak a little Spanish, but I always need help translating the daily specials on the chalkboard and tonight's was Casera de Pollo Chorizo - homemade chicken chorizo with peppers, onion, squash, garlic, and Mexican crema (Mexican sour cream). Beautifully presented on a slab of slate, the Pollo Chorizo was perfection. The spice and heat was cooled down by the Mexican crema. Scooping up the last bite, that lingering question in my head was...should I order another?


But there were two more dishes to come. One that I have to order every time I visit Buceo 95 is their Daitiles - bacon wrapped dates stuffed with a chorizo goat cheese emulsion. I happen to call these little geniuses, Devils on Horseback. And if you make them with dried apricots they are Angels on Horseback. Little pillows of heaven.


Next up was an order of Piquillos Rellenos - young smoky idiazabal cheese stuffed peppers served on slices of bread. Idiazabal is a pressed cheese made from goats milk that has origins in the Basque and Navvare regions of Spain. The first sense that hits you is the smokiness of the tender peppers. Marry that with the idiazabal and the fresh bread to soak up all of those lovely flavors and I'm a happy camper. Chased with the Rioja = more happiness!


I'm willing to share with all of New York City that Sunday's at Boceo 95 are deliciously quiet. And I don't think I've spoiled the discovery. Hey, for some, that may not be what they are looking for.

Treat yourself to a virtual tour of Buceo 95! 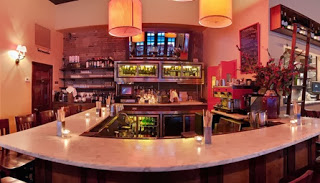