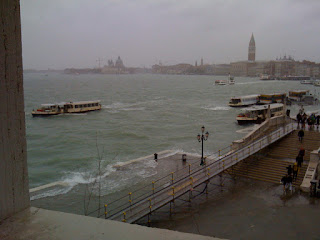 The Sixth Highest Acqua Alta, Opera In A Private Palazzo And A Movie-like Ending! 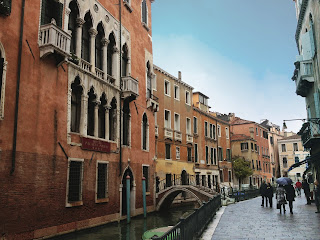 We had gone to sleep the night before knowing that an acqua alta would most likely occur the next morning. Common in Venice between November and December, the flooding happens when a full moon coincides with a storm. And the next day it was predicted that we would have gale winds coupled with extreme barometric changes. (Not a great thing for any of us who live with balance disorders. Breathe, remember to breathe.)

Early that morning, it was a vaparetto that was banging against the Arsenale stop desperately trying to dock, that woke me up. Right after that, an emergency siren screamed out to all of Venice that the acqua alta had arrived and this was what I saw out of my window at the Hotel Bucintoro. 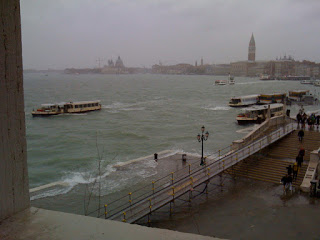 By the time my travel partner, Bud Santora, and I had made it down to the first floor for breakfast, the Baltic Sea was literally climbing up the side of our hotel.

At about 11:00am the storm surge rose an amazing height of 58.66 inches. That's 4.89 feet! In actuality, that meant it was only about thigh high on Venetian walkways but still problematic for those of us who didn't pack hip boots.  Out of nowhere, vendors emerged selling tourists make-shift waders and shop owners put Wellies for sale, front and center in their windows. By mid-afternoon the sea had retreated and other than some pooling here and there, every thing was back to normal. Venetians continued with their everyday routines leaving us tourists walking around thinking, what the hell just happened?

This is probably the only time you're not going to see pigeons in San Marco Square!


Not knowing what was going to be open or closed (everything was open), we bought tickets for a matinee performance of a show proclaiming they perform 365 days of the year, the Teatro San Gallo. It was a musical telling of the history of Venice.  (No small feat in less than two hours.)
Although it was informative, entertaining, and funny, it was a little awkward to have the entire cast playing to the eight of us in the audience who were sitting in about an inch of water. But I understand the small turn-out...we had just experienced the sixth highest acqua alta in recorded history! If you've never been to Venice before and/or need to catch up on some history, this is actually a great show to see at the beginning of your visit. 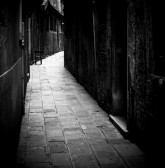 After the performance, we decided just to wander. Everyone says that Venice is a city to get lost in. Well, no matter what city I visit, I get seriously lost at least once. And Venice was no exception. Walking past the Piazza San Marco we headed out east, I think, behind the Basilica. We walked over one canal and then another until we entered what was clearly a residential area of Venice. My sense was that we were approaching the Arsinale district but we didn't have a map. The sun had gone down and no longer were there shops or restaurants or canals with gondoliers and tourists. There was no one and nothing except narrow walkways flanked by towering ancient brick apartment buildings. After an hour of coming up against one dead end after another, the amusing adventure had turned into one of panic. How the hell do we get out of this maze?

Luckily, we stumbled upon a French couple who were also lost and they had GPS tracking on their cell phone. If we hadn't met up, I'm certain we'd still be in Venice. Hmm, that doesn't sound too bad. Walking GPS apps for iPhones and other apps are a godsend, but check with your phone carrier to see what their fees are. We chose not to activate our phones in Europe because of the crazy high cost. (Note to self: Don't leave hotel without map. Ever!)

Exhausted and frazzled, we ended up at the Rialto Bridge and from there I knew where we were. Walking back towards our hotel and not having eaten dinner, we turned a corner and there was the Hardrock Cafe. We were tired of walking and didn't feel like trying to discover another quaint place or wrestle with a foreign menu and the thought of a cheeseburger and fries with a smart cocktail sounded perfect. And it was. Really friendly staff and the food hit the spot.

On our stroll back through Piazza San Marco we decided to have a nightcap at the Gran Caffe Chioggia. Like Caffe Florian, it's way overpriced and touristy but we're in Venice! And we lived to tell the world that we survived the acqua alta! A parade of people marched by to avoid some of the aftermath of the flooding in the square but as soon the drinks arrived they started playing none other than...

The last day of our trip and I wanted to explore the city with my camera. It's amazing how your whole perspective of an environment will change the moment you see it through a lens.


In Venice, everything is beautiful.

The masks and the costumes... 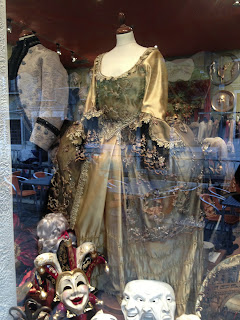 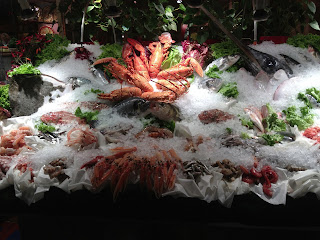 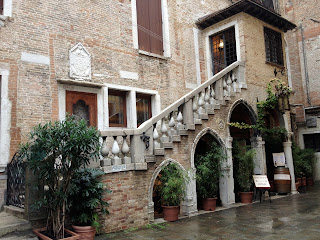 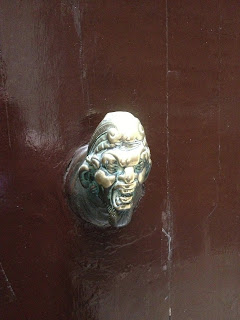 even the apartment buzzers. 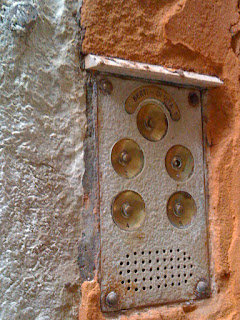 Later in the day we sat down at a cafe and ordered a pizza and a bottle of wine. 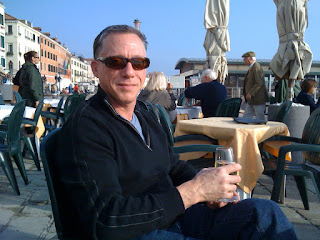 Refreshed and revived, we revisited the Basilica San Marco (on different trips we had both seen it before) but also went up to the top of the Campanile di San Marco - which was a first for me.

Originally it was a lighthouse but in 1902 it collapsed. Rebuilding began the next year and now the bell tower offers stunning views of the city once again.


For our last evening in Venice I bought tickets to experience Musica a Palazzo. Performed in the 15th century Barbarigo Minotto Palace you can choose between seeing one of three operas or a collection of love duets. (We chose the duets.) And allow time to find the palace, it's a bit tricky. Once you go down a dark alley, you ring a buzzer and enter a majestic courtyard. We climbed the staircase up to the second floor we were greeted with flutes of champagne and escorted into the grand salon. The singers and musicians were all professional and extremely talented. Really fantastic. After several songs in the salon, there was an intermission, we were offered more champagne, and then headed into the master bedroom where the duets continued. Next time I'm in Venice I'm going back to see one of the operas, it was that fabulous.
After the performance I had made late dinner reservations at Caffe Centrale.

The design is chic, eclectic and is located near the opera house, Teatro La Fenice. We shared an appetizer of hot round bread topped with mozzarella, mushrooms and prosciutto. A scrumptious gooey mess! I had broiled mixed seafood and Bud, the filet mignon with potato mousse. D-e-l-i-c-i-o-u-s-!

While heading back to the hotel I reflected back upon this trip to Venice. Revisiting a city can often be a letdown. But not this time. If anything, Venice was more exciting than I remembered and at every turn I found something that creatively inspired me. I felt I had so much more insight into what my new novel, Acqua Alta, was going to encompass. I just needed that final moment - that perfect ending. And then it happened. I walked out onto the Piazza San Marco one more time and found myself completely alone at the stroke of midnight.

My ending found me.