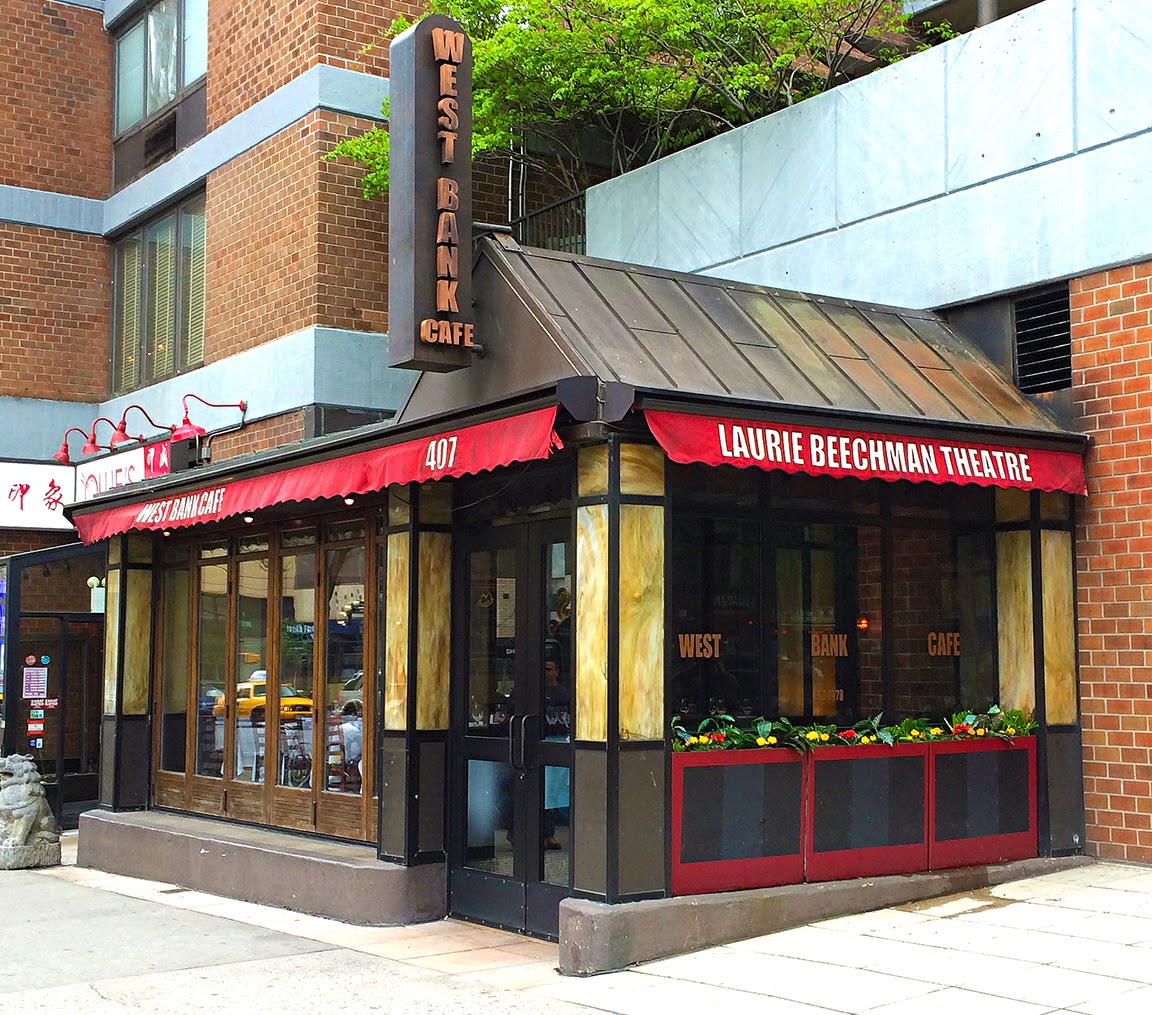 I had the absolute pleasure of having lunch at the West Bank Cafe . . . 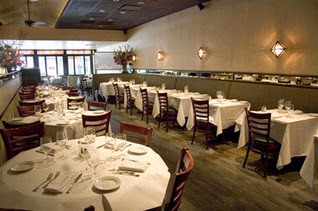 with three of the most creative, successful and lovely people I know . . .  theatrical press agent, Sam Rudy, actress/writer, Ann Talman and director/professor, Anne Drecktrah. First let me say, I love the West Bank. It opened in 1978, is owned by Steve Olson, and is located on Theatre Row in Manhattan - 407 W. 42nd Street, NYC 10036 - 212.695.6909. And honestly, this is my "go to" place for great food and celebrity sitings in the theatre district.

Hotel Note: If in need of a hotel in this area check out: The Pearl Hotel.

Annie has an extensive resume that includes film, television and theatre. Her Broadway debut was starring as Elizabeth Taylor's daughter in The Little Foxes and she appears in one of my favorite Seinfeld episodes, "The Good Samaritan." Most recently she's written and stars in a one woman show titled Woody's Order! Based on her own life, in the play Ann juggles her acting career with being her brother Woody's caregiver, who suffers from nonverbal cerebral palsy. Woody's Order! will run again in NYC at the 5th Annual United Solo Theatre Festival. Her first show is on Monday September 29th @ 9pm (tickets will be available soon but I'll blog about her show again) at Theatre Row, 410 West 42nd St...right across from the West Bank Cafe!

Sam and I have been partner's in crime since 1975 when I met him at Penn State. I was acting at that time and cast in two musical productions that were part of the Festival Of American Theatre, Girl Crazy and Wonderful Town and Sam was working the box office. We became fast friends and reconnected several years later when he moved to NYC and together we have terrorized innocent victims throughout the US and Canada with our shenanigans and lewd behavior for decades. Among Sam's extraordinary credits - he's currently the theatrical press agent for Cinderella on Broadway, has worked over a decade for Avenue Q, and will be representing Sting's Broadway bound musical, The Last Ship, fall of 2014.

And what did he order? Organic Free Range Chicken - with mushrooms, baby carrots, haricot verts, mashed potatoes, and chicken jus.

I met Anne while attending the University of Massachusetts - Amherst and she cast me in the musical Dames At Sea. Of all the shows I did in the following 11 years, this was truly one of the most glorious experiences. After getting her Masters Degree at Penn State, Anne went out to Los Angeles where she was the production assistant for several TV shows including our favorite, The Toni Tennille Show! Anne also directed the series Crimes in Time for the History Channel, Top Secret for the Discovery Channel, and three of the Nova programs for the PBS. She eventually returned home to her roots and taught theatre at the University of Wisconsin - La Crosse. Although she is now retired, her directing schedule is busier than ever. Some of her shows include Circle Mirror Transformation, Becky's New Car, Waiting for Lefty, Mr. Marmalade, On the Verge, Tomfoolery - many staged at the Pump House Regional Art Center in La Crosse.

Plus, Anne and I celebrated our 40th anniversary of friendship. (We must have become friends at birth.)

And what was for lunch? Nicoise Salad - chilled seared tuna with haricot verts, radishes, tomatoes, fingerling potatoes, olives, quail's egg, served on a bed of greens.

And then there's me. After years of acting, singing, and dancing I segued into being a shiatsu practitioner. For 30 years I practiced full-time but as many of you know, the writing bug struck and I now have 7 books published - one of which, Birthday Pie, is currently optioned to be an Off-Broadway play and a feature film. In fact, Annie Talman read the role of Clairese in the backer's audition of Birthday Pie that was performed at the John Houseman Theatre, which also included the very talented Betsy Palmer, Mia Dillon, Peter Bloch and Mark Philip Hayes with Rick McKay narrating.

The food at the West Bank Cafe is truly delicious.

Dizzy Note: Choosing a late afternoon reservation was also good for my vestibular disorder . . . less crowded and quieter (except for us laughing our heads off).

And I should also mention the Laurie Beechman Theatre . . . 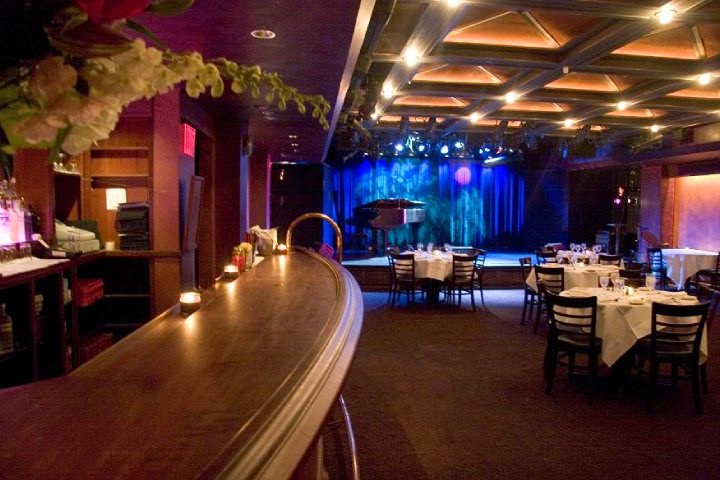 which is located downstairs at the West Bank. A 100 seat cabaret venue, it has a great line-up of performers including Joan Rivers, Jinx Monsoon (Rupaul's Drag Race winner and terrific singer/comedian) and my 94-year-young friend and singer Ilona Royce-Smithkin whom Sam introduced me to in Provincetown, MA way back in 1983.

Once we ALL got through the list of our physical ailments - we tried to clear up each others foggy memories of the past. Most of the conversations hovered around who slept with whom and when and are they still alive. Actually, it was a hilarious afternoon of anecdotes, what's going on in our lives now and what's about to happen in the future, which made for a very exciting and heartwarming round table. 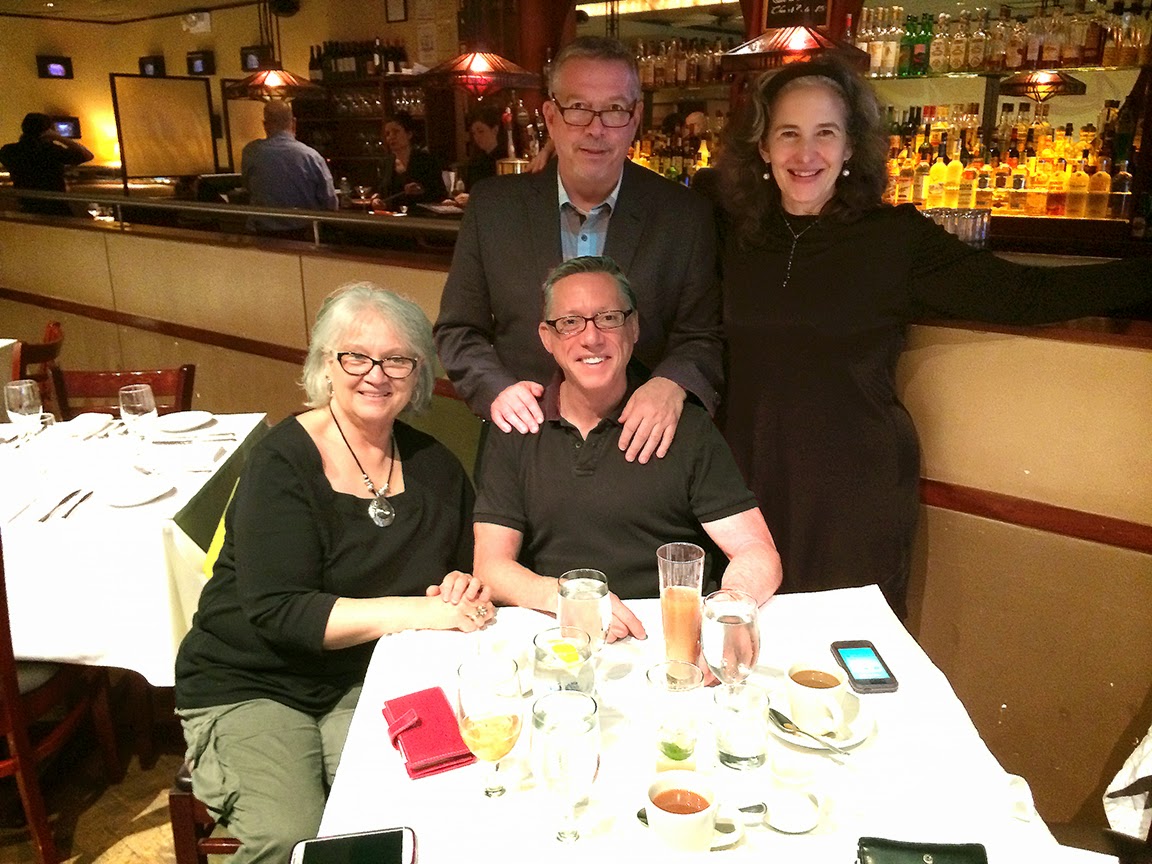